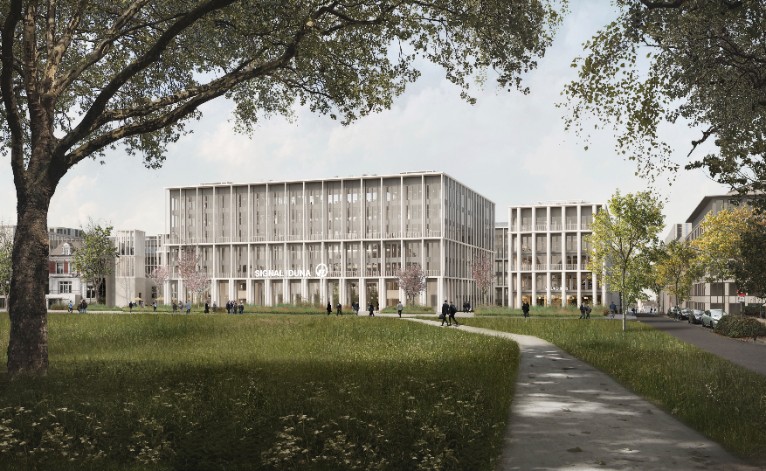 The design submitted by David Chipperfield Architects Berlin was selected as the winning entry in a two-stage architectural competition for an office development in Hamburg-Eimsbüttel. The panel of judges included representatives of Hansainvest Real Assets, the Hamburg Building Authority and Signal Iduna, the future anchor tenant. The practice’s submission won against twelve competing entries.

Situated between the Outer Alster Lake and Dammtor Station, the new office complex will be built with materials recovered from the previous buildings, providing office space for the Signal Iduna Group headquarters, among others, as well as a public ground-floor area. The complex integrates into the heterogeneous urban environment consistently and confidently: Adjoining a closed street block to the south, several free-standing buildings in different dimensions will form a permeable end to the block.

Customised structural frameworks will be designed and used for the buildings in response to their different spans, including solid-timber, timber-hybrid and reinforced-concrete structures. This approach will create maximum flexibility for the intended use as well as for any other purposes envisaged for the future.

A courtyard house welcomes users and visitors approaching the site from the station. The complex also opens up to the public urban space on the other sides with street-facing loggias and inviting passageways into the block interior. The loggias mark the entrances and the orientation of the individual buildings. Different building heights, terraced paths and squares within the block development and generous planting lend a landscaped appearance to the campus. The public, semi-public and private outdoor areas also include a listed fountain enclosed by the courtyard house.

The serial arrangement of the façades replicates the structure of the buildings whilst developing its own proportional pattern through multi-storey orders and corner contractions.