There is a crack in everything, and that is where the light enters
Leonard Cohen 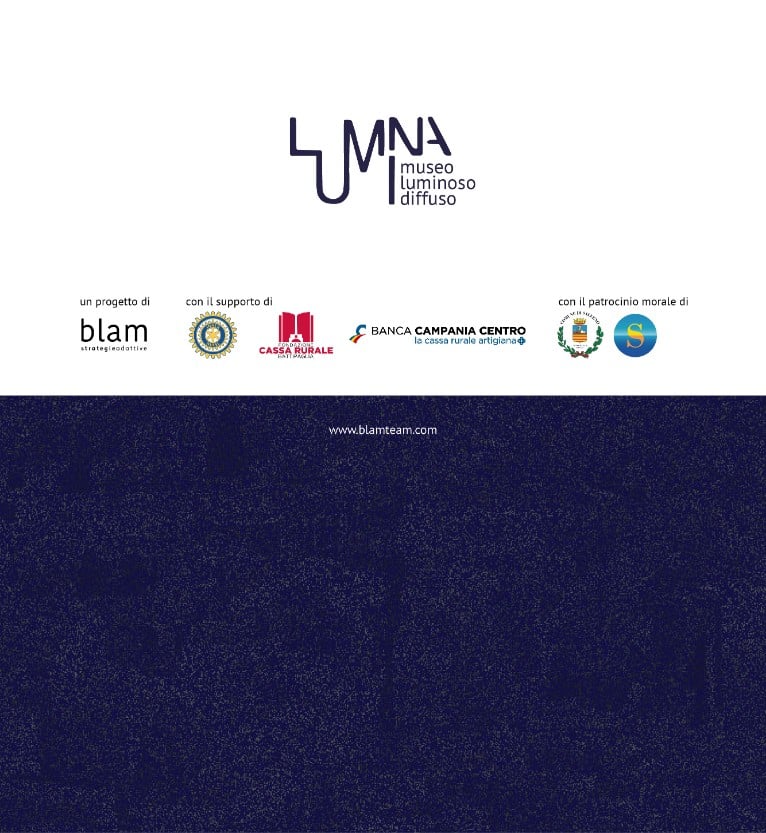 Blam, in collaboration with the Inner Wheel Salerno CARF Association, Battipaglia Cassa Rurale Foundation and Banca Campania Centro and with the support of the Municipality of Salerno, promotes the first edition of the Lumina call for tenders, aimed at the realization of the first artistic light installation of the Museo Luminoso Diffuso, a Luminous Museum spread all over the city, which it is intended to be built in the historical centre of Salerno, in Italy, through art residences. The aim of the project is to build a map of interventions able to bring light to abandoned and neglected places in the historical centre of Salerno and able to reveal them under a new “light”. Using the art as a tool the aim of the project is to activate a participatory process that can allow these places to be regain a space in the collective urban imagination. Through temporary art light installations, we intend to reflect on the historical cultural heritage and on how it is perceived by the inhabitants, permanent and temporary. The first call invites artists, architects, designers, scenographers and in general those professionals and artists able to plan and carry out the intervention in the form of a temporary installation, related to the identity of the places. LUMINA, is part of SSMOLL, a collaborative urban regeneration project, activated in Salerno by Blam with the support of the Municipality of Salerno and the DiARC - Department of Architecture of the University of Naples Federico II

SSMOLL’s project
SSMOLL, is a project of urban regeneration and social innovation ideated and managed by Blam that starts from the adaptive reuse of the former church titled to San Sebastiano del Monte dei Morti, also known as the Chiesa dei “Morticelli”. A scientific agreement between the Municipality of Salerno and the Department of Architecture of the University of Naples Federico II, DiARC, gave birth in December 2018 to the experimentation of the first urban participated laboratory in the city, named SSMOLL, acronym but also reference to small and precious dimensions of the historical building.

Who we are
Blam aims to define “adaptive” design strategies in order to experiment new practices of urban regeneration and social innovation through the enhancement of cultural heritage. Blam builds networks of synergetic relationships between local administrations, local cultural actors, inhabitants-users and fragile places of the city, transforming these into catalysts of new cultural and creative services co-generated thanks to collaborative strategies and actions activated from below.

The place and the history
The place where the first intervention of this widespread luminous museum, the Museo Luminoso Diffuso, is the ex-church of the “Morticelli”, in Largo Plebiscito in the historical center of Salerno, the area of relevance of the space SSMOLL. The Church of San Sebastiano del Monte dei Morti, built in 1530, is a rare example of sixteenth-century octagonal architecture located in Largo Plebiscito. In 1615 the order of the Monte dei Morti was instituted; and after the earthquake of 1980, the church was definitively closed due to considerable damage to the structure that made necessary two restoration campaigns over time, the last completed in 2010. Reopened for a few days in 2011, the church was then definitively closed until December 2018 when Blam started the reactivation project. See Annex C

The first phase
This first call invites to reflect on the relationship between light and urban space, in particular on the experience of co-living - in which each place can be different in relation to the perception of its users. The relationship between space and time, the relationship between space and light and its ability to become a system of relationships and a network is fundamental. Through the use of participatory laboratory practices, before and / or during the period of residence, the winner is invited to investigate the neighborhood and explore Largo Plebiscito in its logistical complexities, to reveal it under a new “light”, with the prospect of highlighting the former church of the Morticelli by reactivating a process that could allow this place to, once again, be part of the collective urban imaginary. Largo Plebiscito is currently one of the marginalized urban spaces of the historic center of the city of Salerno. The residence is aimed at the production of a new work in the form of a light art installation in the urban space, respecting the identity of the places, which meets the criteria and objectives set out below, without technical constraints, compatibly with the spaces indicated and the related goals. Furthermore, the proposal must be coherent with the premises of the SSMOLL project, mentioned in the call. Objectives Participants are invited to represent the identity of the place in the form of a light art installation to be placed in the square of Largo Plebiscito, outside the church and in relation to the building. The objectives are: • to produce the symbol of a collective work, able to represent with a single element or several elements, the new identity of an urban “common good”, conveying the collective idea of urban regeneration activated 4 by the SSMOLL project; • to activate a dialogue with the related urban context and with the architectural and symbolic characters of the former church; • to be the result of a process that, in line with the principles of the SSMOLL project, makes the inhabitants of Salerno participating in the co-production of the work; • to be recognizable, unique and attentive to its inclusion in an historical urban context of considerable value; All ideas proposed must respect the identity of the places. The church is included in the list of historical and artistic interest, therefore, all the proposals must be reversible, easily removable and must not in any way influence/modify the architecture.