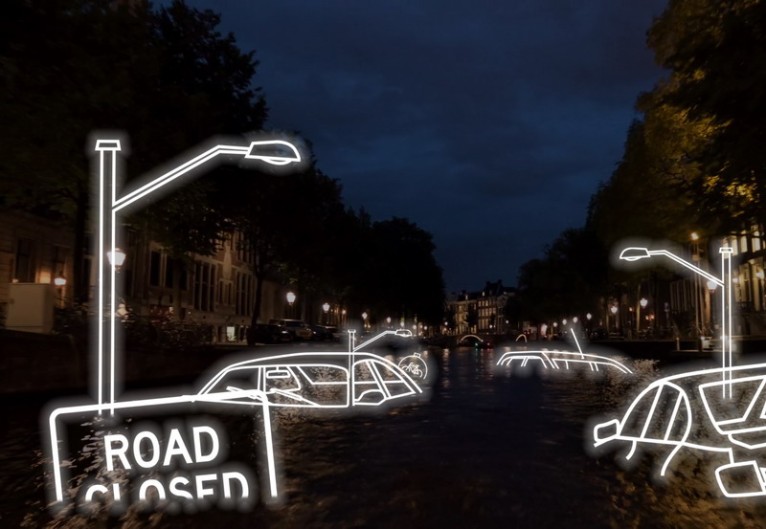 As of Thursday November 28, Amsterdam will be the setting for international light art during the eighth edition of the Amsterdam Light Festival. This winter, for the first time in the history of the festival, a new route with light artworks, unique stories about the city and collaborations with prominent Amsterdam cultural institutions will enrich the eastern part of the city centre. From 650 entries, twenty established and up-and-coming artists from 16 countries have been selected to shake-up Amsterdam with the theme DISRUPT!. Visitors can experience Amsterdam Light Festival by boat, by bike and by foot until 19 January 2020.

Disruption: in nature and in the city streets

A sudden disruption often comes at an inconvenient time and has to do with conflicts, chaos and perhaps even danger. Disruption can empower change as well. It questions fixed assumptions, raises new discussions and exposes possibilities. The participating artists have interpreted the theme DISRUPT! in many different ways. Some installations act as completely new interventions in the streetscape, while other artists transform the existing architecture in the city and allow visitors to look at the city from a different perspective. In line with the theme 'DISRUPT!', the festival has chosen a completely new route for the first time: Oosterdok, Oudeschans, Amstel, Nieuwe Keizersgracht, Plantage Muidergracht, Entrepotdok.

Left: The Ice is Melting at the Pøules by Martin Ersted - Right: Surface Tension by Tom Biddulph & Barbara Ryan

On the facade of Het Scheepvaartmuseum (the maritime museum), Danish artist Martin Ersted visualises global warming by translating graphs of rising global temperatures into moving laser lines. This combination of scientific facts and pure, intense laser light in Ersted's work called The Ice is Melting at the Pøules results in a performance that is both confrontational and poetic. British Tom Biddulph and Barbara Ryan show the disastrous consequences of global warming. With minimalist lines of white light, they transform a piece of a canal into a flooded street in their artwork Surface Tension, with the contours of towed, floating cars, traffic signs and lampposts.

In his work Nacht Tekening, the Dutch artist Krijn de Koning plays with the iconic shapes of the famous Magere Brug and lets you look at it from a different perspective. De Koning took the existing shapes as his starting point, mixed them up and put them back on the bridge as light lines. The Taiwanese collective UxU Studio confuses visitors with a gigantic, blue-lit bomb hanging quietly in the air at the Oosterdok. As soon as you take a closer look, it becomes clear that this ultimate symbol of deregulation and destruction is made up of thousands of illuminated feathers. Strangely, this makes the bomb sweet, romantic and even harmless. 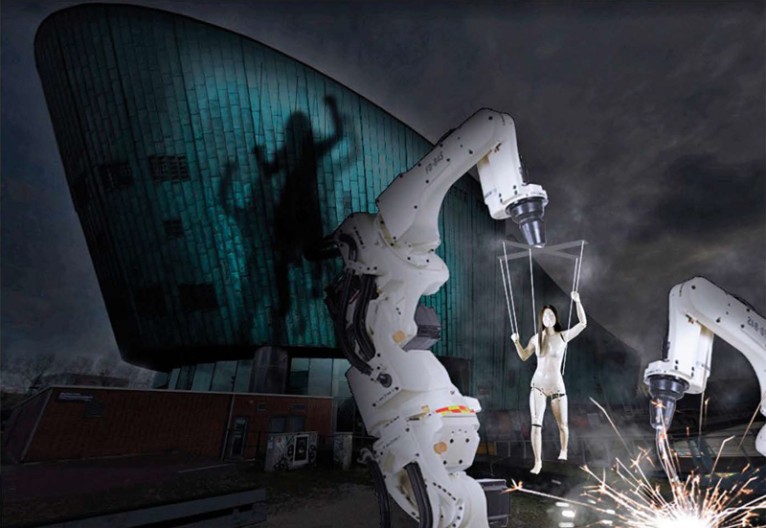 Nobody by Gabriel Lester

Shadow play
For his installation Nobody, Gabriel Lester places two robot arms in a glass container on the pier at the NEMO Science Museum. One robot casts welding light on a puppet that is being played by the other robot, creating a shadow play on the bow of the museum building. It is a poetic commentary on the modern technology that surrounds us: man controls or 'plays' the robot, but we are just as much played by machines. 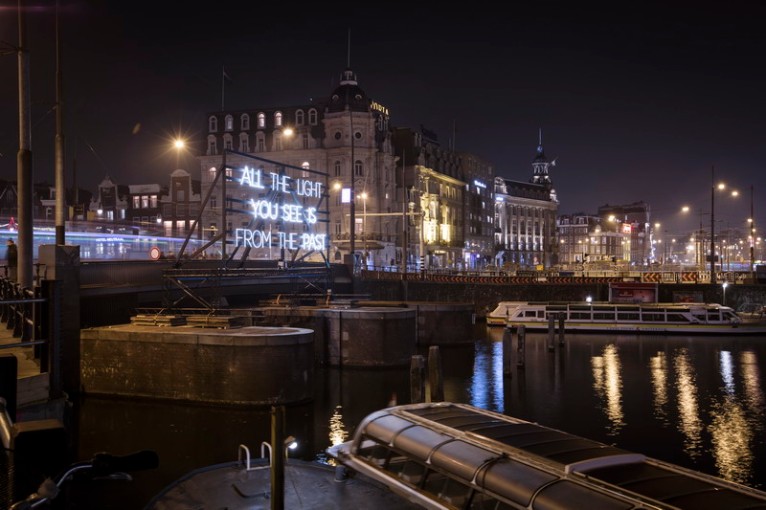 All the Light you see by Alicia Eggert

Programming
Special collaborations with prominent cultural institutions in Amsterdam provide a broader festival experience this edition. During the festival period, ARTIS (the zoo) can be experienced in the dark after opening hours with a special app. In addition, the ARTIS-Academy organises two evening programmes about disruption and light and darkness in nature. Het Scheepvaartmuseum also works on special programming. 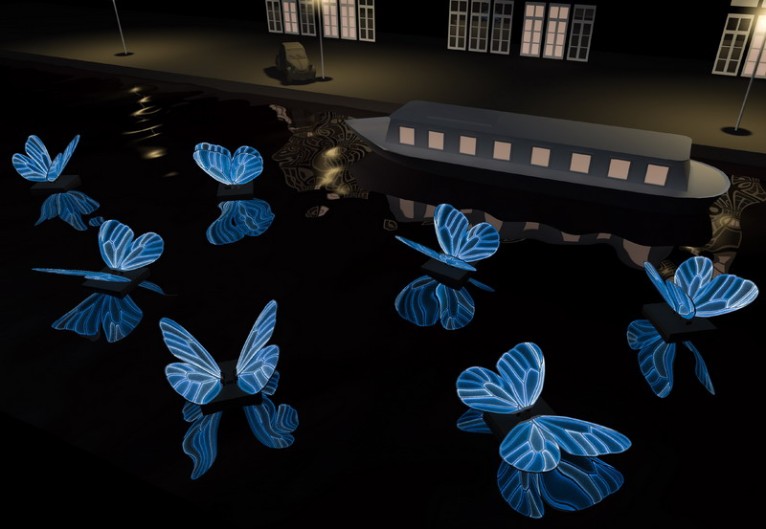 Education
With various educational projects Amsterdam Light Festival offers students a playful introduction to light art and offers a new generation of artists a platform. For example, 850 pupils from 17 primary schools together with the creative collective 72andSunny and Juf op Straat have created a mysterious, daily changing work of art with dozens of animal eyes on the Entrepotdok side of ARTIS. Emerging talents get special attention every year in the exhibition as well: Amsterdam Light Festival collaborates with Amsterdam Smart City, the Breitner Academy and the Amsterdam School of the Arts. This year, three students will create the artwork AD/Empty Domination. This piece makes us aware of the number of advertisements in the streets, by showing a void. 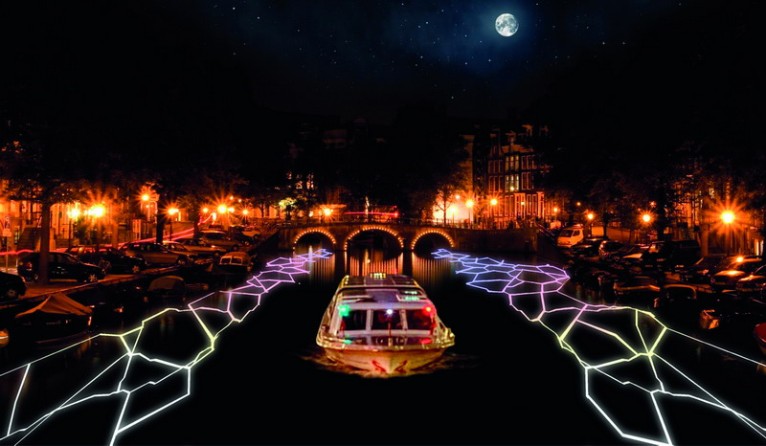 Unique stories about the city
Architectural historian Irmgard van Koningsbruggen enriches the new route with city stories that allow visitors to look at the city, its history and architecture from a different perspective. At five locations along the route, a tale of the city is told from a lighted building or details of it. These buildings and the stories behind them are literally put in the spotlight. The theme DISRUPT! is present in every story. They include, for example, the the city's squatters' past, war memories and drastic changes in visions of the city. 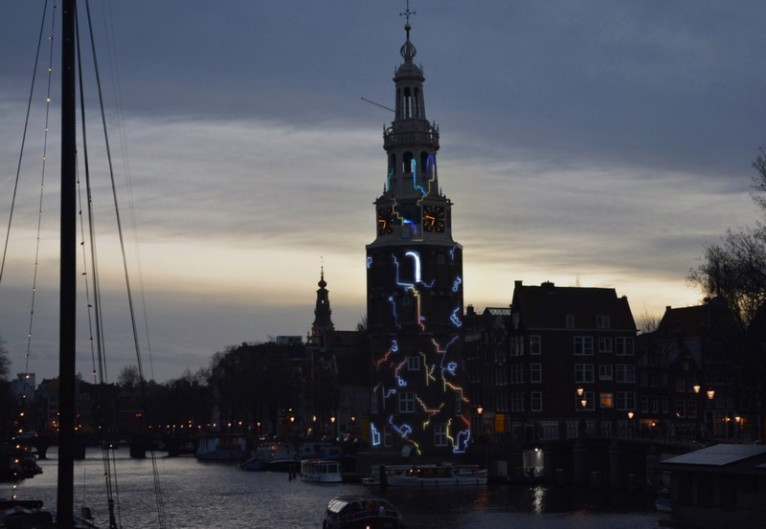 The Cracks by Karolina Howorko