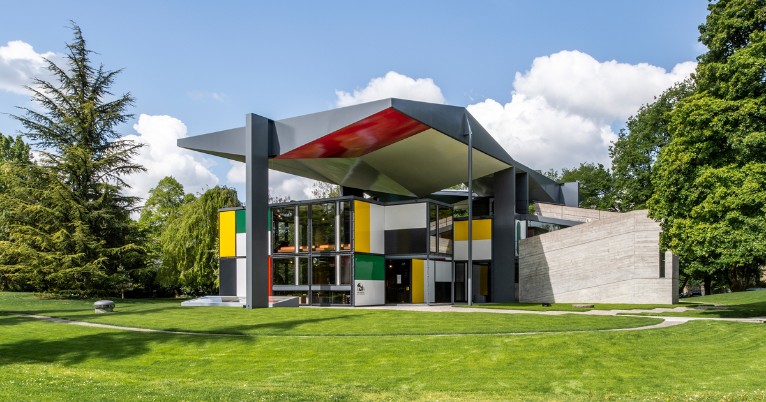 On 11 May 2019, the newly renovated Pavillon Le Corbusier in Zurich opened its doors to the public. Le Corbusier’s last building is a colorful architectural masterpiece that is run as a public museum.

The opening exhibition, Mon univers, explores the personal passion for collecting demonstrated by the great architect, designer, and artist and provides a glimpse of his creative cosmos.

Originally opened in 1967, the Pavillon Le Corbusier was used as an exhibition venue for presenting Le Corbusier’s work and ideas to a wide audience. In keeping with this spirit, the pavilion reopened as a public museum operated by the Museum für Gestaltung Zürich on behalf of the owner, the City of Zurich.

Museum Operations
The opening hours have been extended to seven months a year (from May to November) and six days a week in recognition of the great interest shown by the general public in Switzerland and throughout the world. More visitors will thus be able to see the pavilion in the future. A new temporary exhibition is to be presented each year showcasing the various facets of Le Corbusier’s oeuvre. The Swiss-French architect, architectural theorist, and urban planner was also active as a painter, draftsman, sculptor, and furniture designer, and left behind a highly diverse and extremely influential body of work. A varied educational program with guided tours, exhibition talks, and workshops, as well as a series of performances and concerts developed especially for the pavilion, will make it an even more attractive destination for repeated visits. 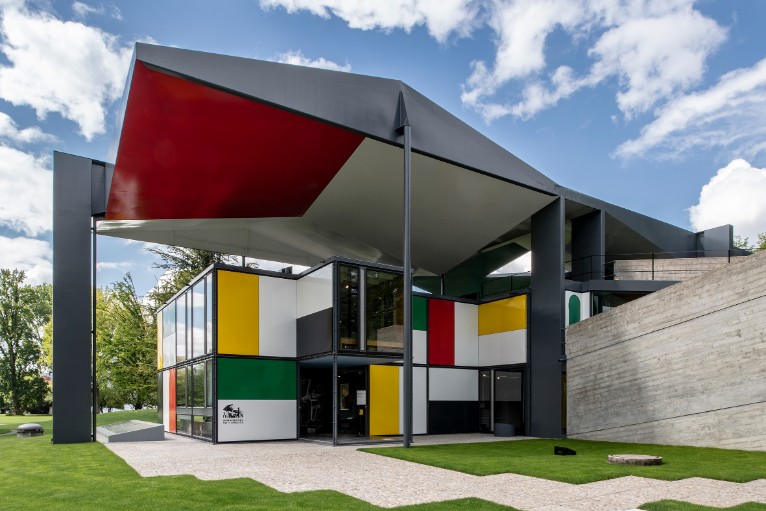 The Main Exhibit: The Pavilion Itself
Le Corbusier designed the pavilion with the goal of building the ideal exhibition venue. Art, architecture, and the life infusing them were to be merged in a new symbiosis. With this exhibition space in the form of a pavilion, Le Corbusier thus realized his vision of a “synthesis of the arts.” Numerous sketches and plans attest to a prolonged development period that began in the mid-1950s.

The ship-like construction is based on Le Corbusier’s Modulor system of proportions, and the building embodies a number of his other design principles as well—as a kind of architectural legacy. These tenets include prefabrication, elements such as the access ramp and the small roof garden that recur throughout his oeuvre, and the “promenade architecturale,” a carefully conceived route through the building to enable the visitor to optimally view and experience the architecture. The structure is the last completed design by the influential architect and his only building made of steel and glass. The colorful pavilion with its filigree look is renowned worldwide as an architectural gem and gives Zurich a new cultural and tourist highlight as a walk-through work of art.

Visitors can wander through the rooms and discover the pavilion at their own pace. Across some 600 square meters and four stories, the pavilion offers various perspectives and vantage points. Le Corbusier’s furniture, some of it permanently installed, is spread throughout the pavilion, demonstrating its second designation as a residence and inviting visitors to linger. Even the small roof terrace is now open to the public, affording unobstructed views of the Zürichhorn river delta and the lake.

The Opening Exhibition: Mon univers
The exhibition Mon univers extends over all floors and is dedicated to the Swiss architect’s passion for collecting, giving visitors a glimpse of his versatile creative cosmos. Throughout his life, Le Corbusier pursued the vision of a synthesis of the arts, and for this purpose he amassed objects and trouvailles from art, industry, folklore, and nature, which he arranged in assemblages. He drew on a wide variety of objects as references and sources of inspiration for his various artistic practices—including conch shells, ceramics from the Balkans, flotsam, and industrial glass. The exhibition brings together originals from Le Corbusier’s private collection with historical photographs, casts, and paintings, as well as finds from nature. Loans from the Fondation Le Corbusier in Paris, important private collections, and the Antikenmuseum Basel enter into a visual and thematic dialogue with the pavilion. 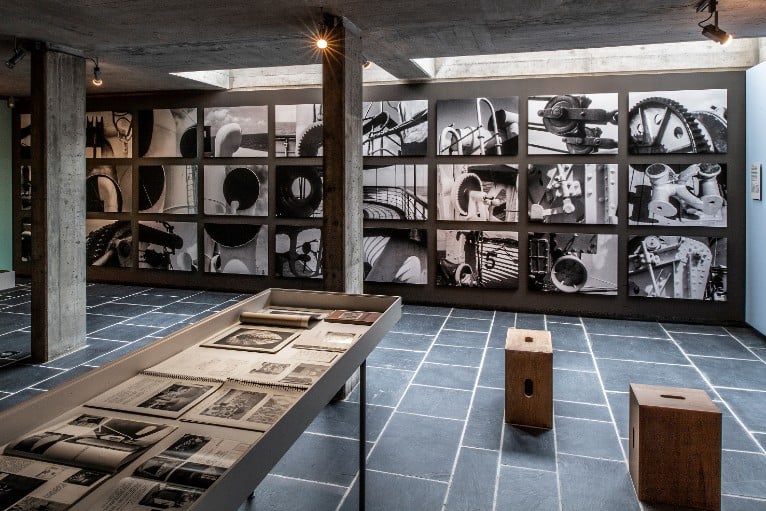 On the lower level, around fifty personal collectibles from the Fondation Le Corbusier are presented, along with film clips of Le Corbusier (taken with a 16mm camera), and a wall of large-format film stills.

The legendary 1931 installation Les arts dits primitifs dans la maison d’aujourd’hui is recreated in the two-story atrium on the ground floor. In this installation in his studio, Le Corbusier arranged a cast of the Attic calf-bearer known as the Moscophoros alongside a painting by Fernand Léger, a Peruvian Chimu ceramic piece, a chunk of glass, a Benin bronze, a brick, a wicker chair, and his own painting in an exciting ensemble.

While on the lower level originals are shown and on the ground floor copies, the upper floor is devoted to a few originals that Le Corbusier would have gladly collected in the opinion of the curators. These include a Nimba shoulder mask from the Baga people, a marble Aphrodite (Antikenmuseum Basel), frightening Ekoi head masks, and a large-format ceramic vessel known as a tinaja from the Museum für Gestaltung Zürich’s Decorative Arts collection.

Photographs by René Burri
Likewise on view on the upper level (in the small library) is a permanent exhibition of seventeen photographs taken by René Burri (1933—2016) in his role as visual chronicler of Le Corbusier and his work between 1955 and 1965. 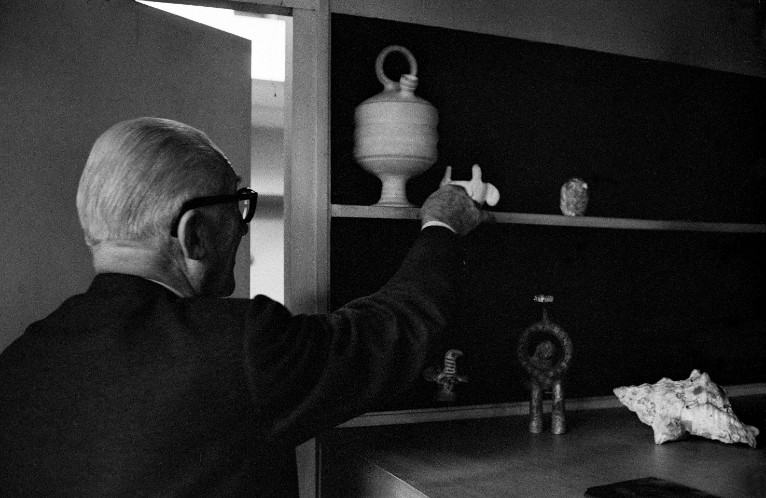