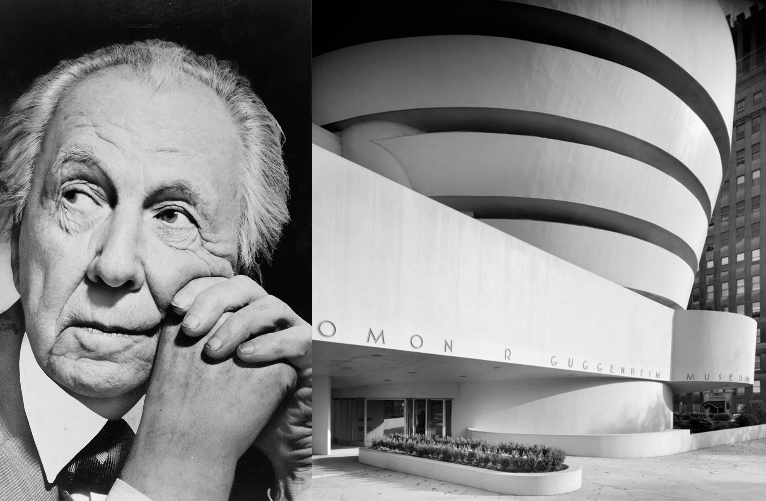 Considered by many to be the greatest American architect of all time, Frank Lloyd Wright was more than an architect, he was an artist who also wore the title of writer, interior designer, and educator.

He designed more than 1,000 structures in his 91 years of life, with 532 of them coming to completion.

His fervor for the environment was the heart and soul of his work and pushed him to establish the Organic Architecture philosophy, which holds supreme focus on blending designs with humanity and their environment.

Landscaping was crucial to his designs, as were windows and outdoor spaces that convened nature and living areas.

While Frank Lloyd Wright passed away in 1959, his legacy and impact on the field have never faded. Here's what his five most memorable buildings tell us about his life and work.

Designed and built between 1908-1910, the Robie House for client Frederick C. Robie and his family was one of Wright's earlier projects. Influenced by the flat, expanisve prairie landscape of the American Midwest where he grew up, Wright's work redefined American housing with the Prairie style home.

According to Wright, "The prairie has a beauty of its own and we should recognize and accentuate this natural beauty, its quiet level. Hence, gently sloping roofs, low proportions, quiet sky lines, supressed heavy-set chimneys and sheltering overhangs, low terraces and out-reaching walls sequestering private gardens." 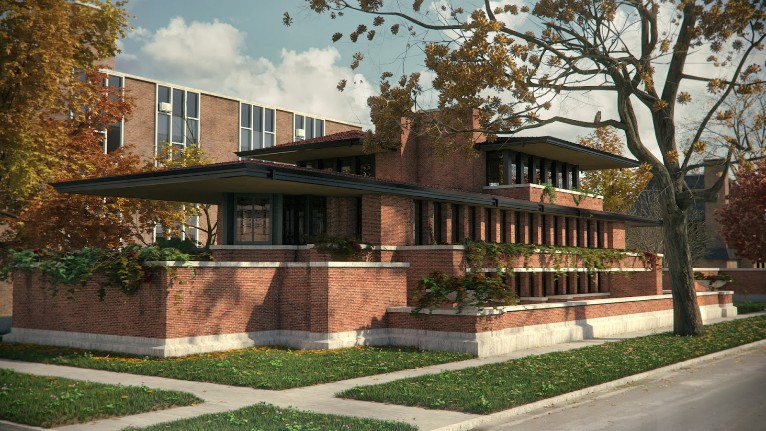 Wright's best-known building in Asia, the now-demolished Imperial Hotel, where he combined his western design principles and a fascination with Japan.

After travelling to Japan in 1905, Wright developed a keen interest in Japanese art and architecture. He was therefore keen to win the bid to design The Imperial Hotel in Tokyo, which would replace the original wooden building that Yuzuru Watanabe completed in 1880.

Wright's hotel, which is no longer standing, was completed in 1923 with the aim to showcase Japan's modernity and entice western visitors. 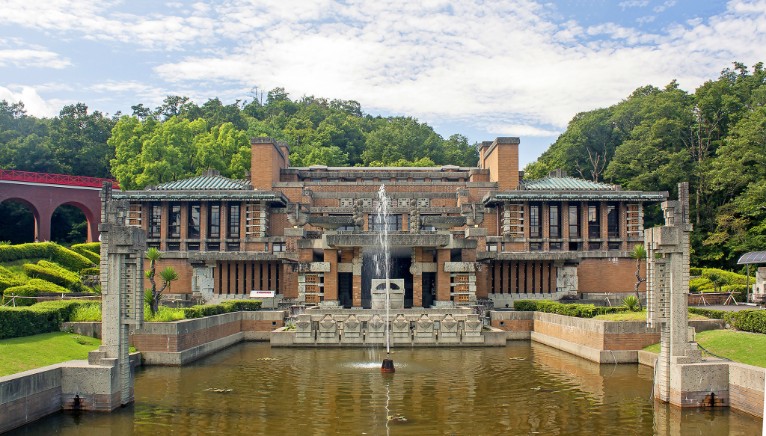 Taliesin West is a National Historic Landmark nestled in the desert foothills of the McDowell Mountains in Scottsdale, AZ. It is also the home of the Frank Lloyd Wright Foundation and the School of Architecture at Taliesin.

Wright’s beloved winter home and the bustling headquarters of the Taliesin Fellowship, was established in 1937 and diligently handcrafted over many years into a world unto itself. Deeply connected to the desert from which it was forged, Taliesin West possesses an almost prehistoric grandeur. It was built and maintained almost entirely by Wright and his apprentices, making it among the most personal of the architect’s creations. 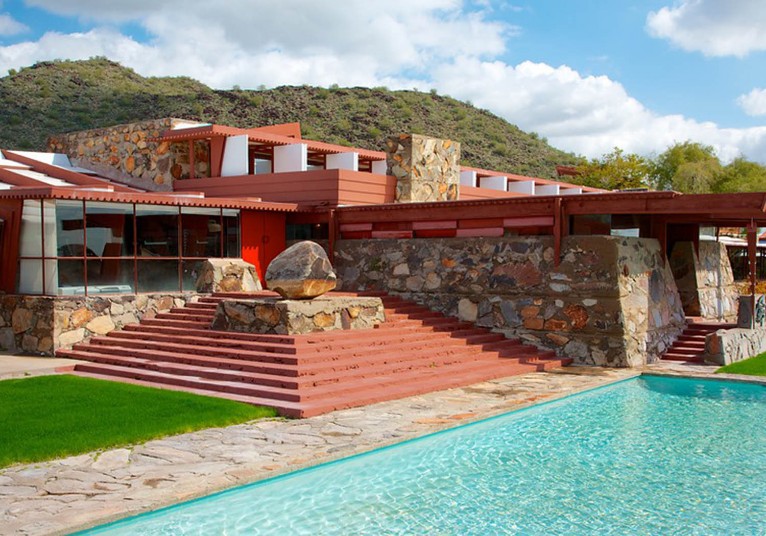 Fallingwater is Wright’s crowning achievement in organic architecture and the American Institute of Architects’ "best all-time work of American architecture." Its owners, Edgar and Liliane Kaufmann, were a prominent Pittsburgh couple, reputed for their distinctive sense of style and taste.

In Fallingwater, Wright anchored a series of reinforced concrete “trays” to the natural rock. Cantilevered terraces of local sandstone blend harmoniously with the rock formations, appearing to float above the stream below.

In 1938, Wright designed additional guest quarters set into the hillside directly above the main house and linked by a covered walkway. Fallingwater remained the family’s beloved weekend home for 26 years. In 1963 the Kaufmanns donated the property to the Western Pennsylvania Conservancy, together with 1,543 acres of surrounding land. It opened its door as a museum in 1964 and has since hosted more than five million visitors. 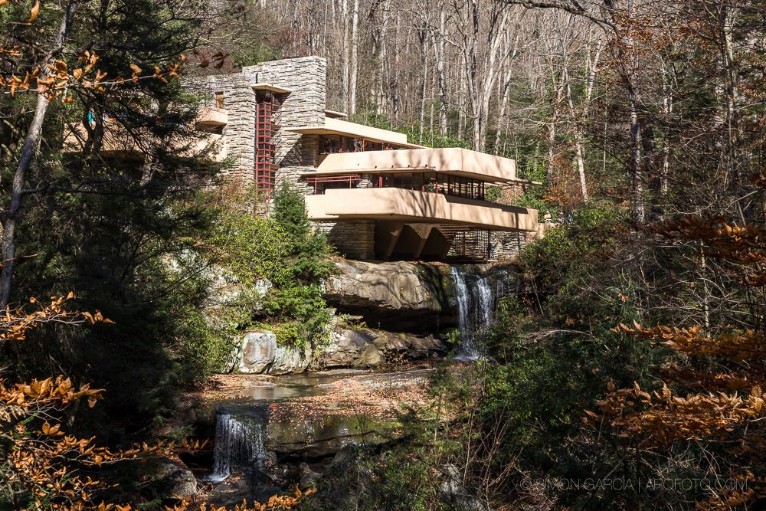 Few buildings have inspired the level of controversy generated by the Guggenheim Museum. In sharp contrast to the typical rectangular Manhattan buildings that surround it, Wright’s museum resembles a white ribbon curled into a cylindrical stack that grows continuously wider as it spirals upwards towards a glass ceiling.

An intensely cinematic helical spiral ramp climbs gently from ground level to a skylight at the top. Dismissed by contemporary critics as a “washing machine,” an “imitation beehive,” and a “giant toilet bowl,” Wright’s design was even decried by avant-garde artists, who claimed that such architecture would compete with the artwork.

Ultimately, the Guggenheim liberated museum architecture from its conservative constraints. Wright’s museum took an active role in shaping the experience of looking at art and set a powerful precedent for which the modern museum remains profoundly indebted. 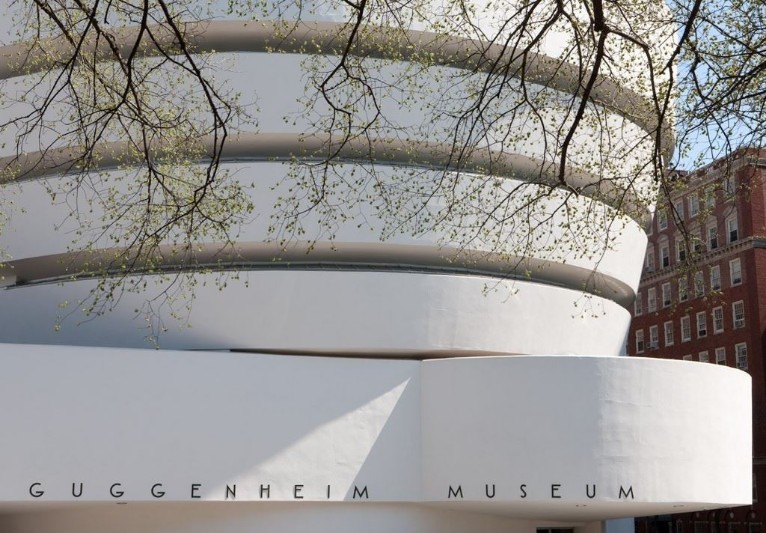