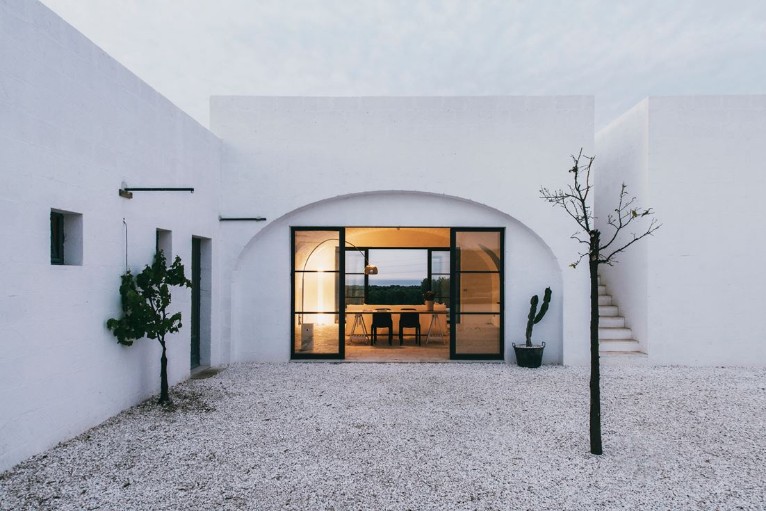 Charming places filled of history, "masserie" are as much a symbol of the Puglia as are the endless olive groves and the trulli.

If you are traveling to Italy, you can see these ancient fortified farmhouses popping up in the Puglia countryside, their high stone walls springing up through the olive groves.

Most of them date back to the XVI century when the spanish empire allowed at Regno delle Due Sicilie the licence necessary for repopulate the abandoned areas of the region. At that time the inhabitants started to build the first masserie in Puglia. 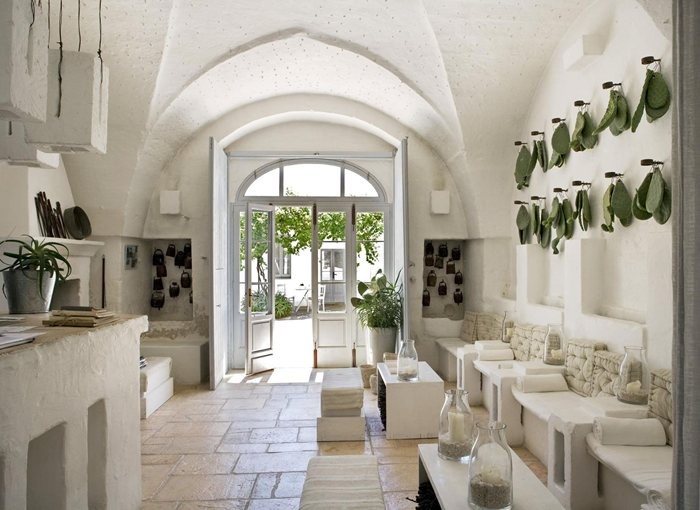 The architecture of the masserie are simultaneously austere and luxurious: the simple yet spacious rooms retain their original charm, including stone kitchen fireplaces, churchlike arched hallways, and restored marble or stone floors.

Today buying and restoring these masserie has been quite popular, many of them have been restored into luxurious five-star hotels, boutique bed and breakfasts or places that hold special events.

Take a look at these stunning places and start to plan your next trip in Puglia! 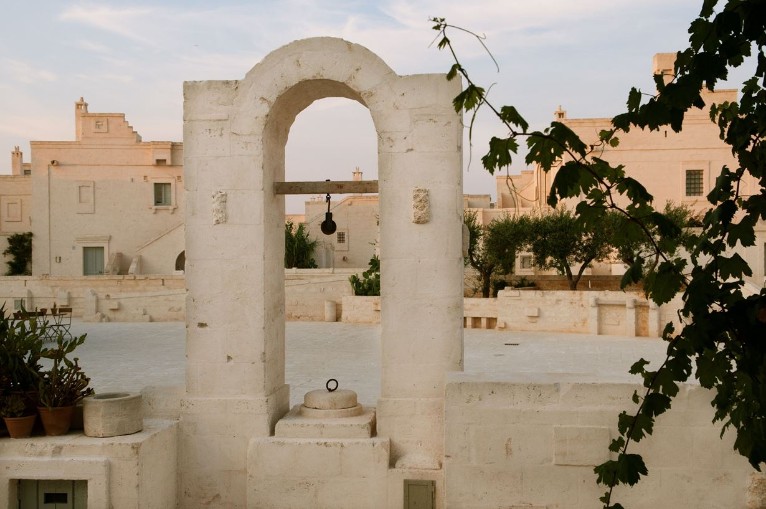 The beauty of Borgo Egnazia inspired Madonna to stay there and Justin Timberlake and Jessica Biel to choose it as their wedding venue. A hidden sanctuary of luxury with a relaxed opulence and accommodating staff, it’s easy to see why. 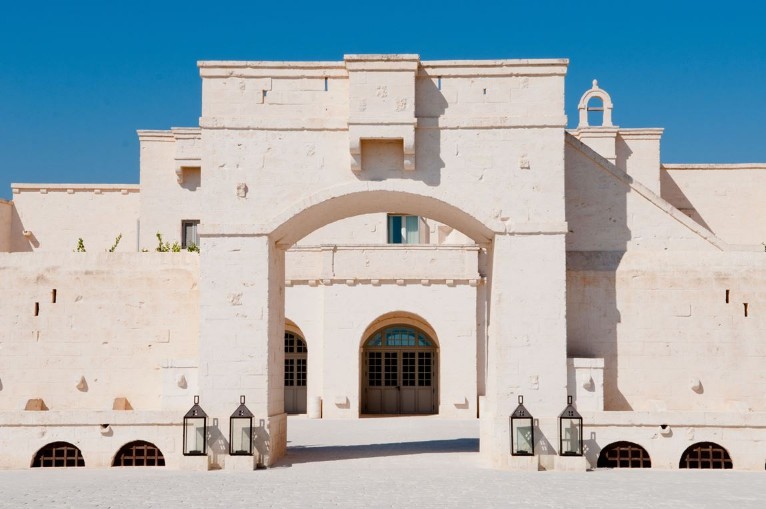 The combination of the suggestive architecture with the high quality standards of the service is mirrored in every detail from the design of the rooms and the entertaining activities proposed to the menus offered at each restaurant. 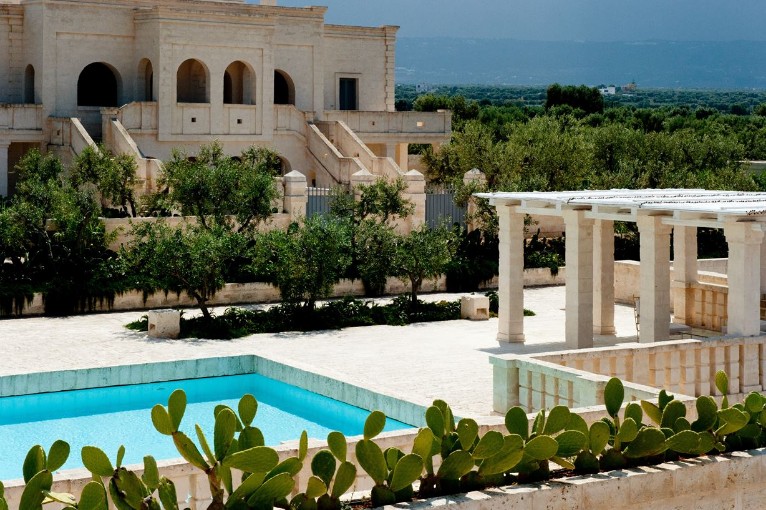 Within an estate of about one hundred and thirty hectares and, in the countryside of Manduria, rises the sixteenth century Masseria Potenti,originally belonging to the rich and powerful family of the Imperiali. It is located in a smooth landscapes which gently declines towards the enchanting Mar Jonio, among endless extensions of olives trees, vineyard and Mediterranean thicket. 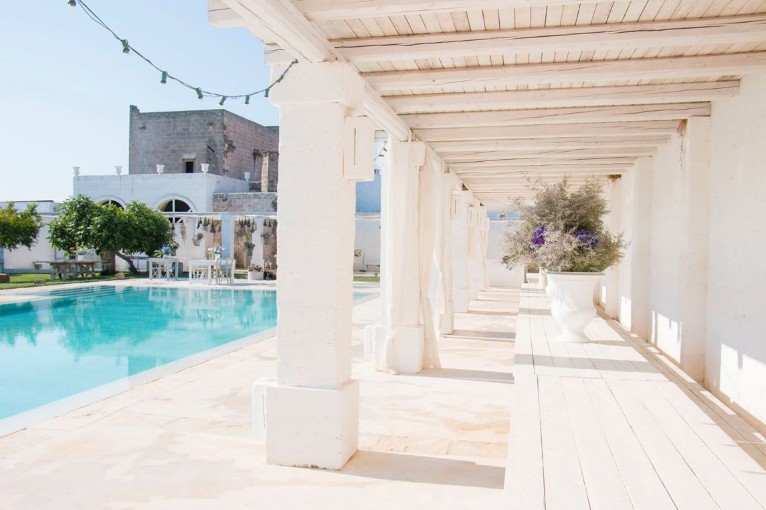 With the rigorous respect of the antique architecture, Masseria Potenti has today become an uncommon agritourism which unites its strong agricultural identity with a refined hospitality. 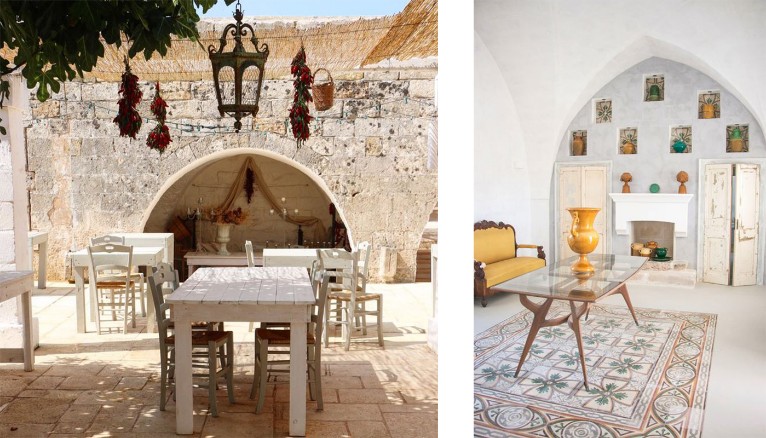 Masseria Cimino is a fortified farmhouse with tower dating back to the 18th century. The Masseria was built just meters from the sea, adjacent to the archeological site where the ruins of the Ancient Roman city of Egnatia, founded in the 6th century B.C., were discovered. In the 1700's, blocks of stone originating from the perimeter wall of Egnatia were used in the construction of the farmhouse, on the walls of which markings dating back to the Ancient Roman period can still be clearly seen. 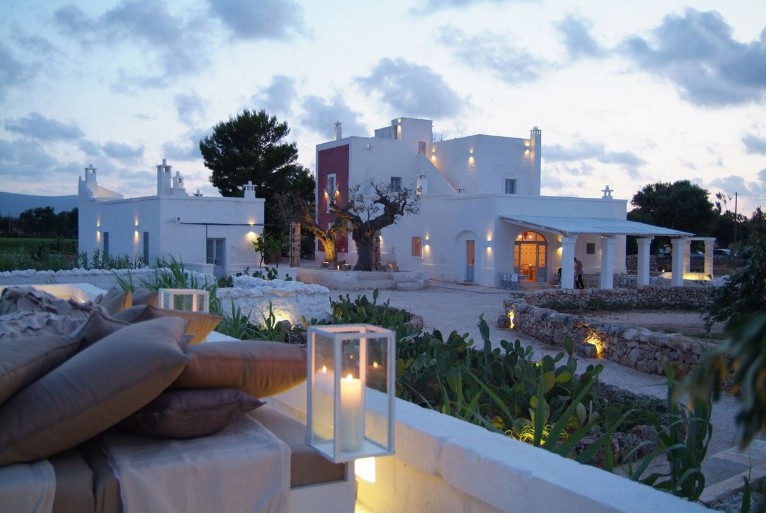 Masseria Cimino, surrounded by expanses of vegetable gardens and century old olive groves, stood at the center of an important agricultural estate, specialized in the cultivation and the preserving of fruit and vegetables. Selection, pressing, packing, and storage were all carried out in the farm's various outbuildings. 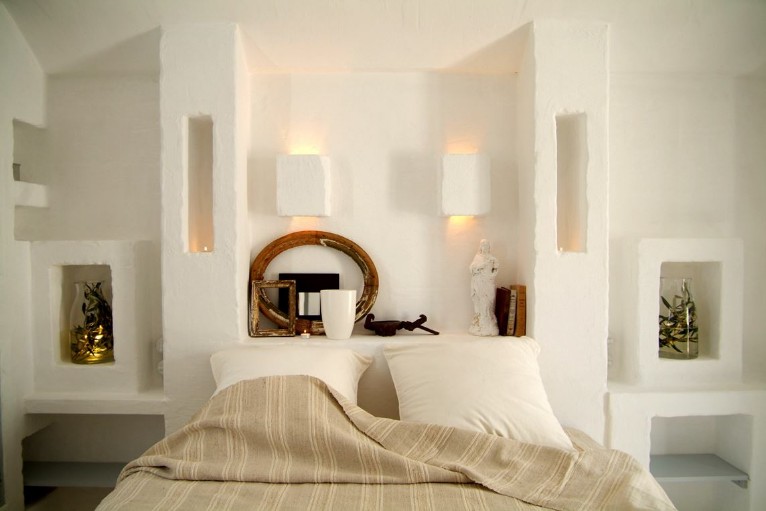 A white stone farmhouse standing proudly on the ridge with views across the olive trees to the sea. Built using traditional techniques and local materials, the modern architecture is influenced by masserie (farmhouses) of the past. Set in five hectares of olive groves with trees up to 500 years old, Masseria Moroseta is an enclave of pared-down relaxation and rural simplicity.

As in a traditional farmhouse, everything is set around the central courtyard: the salon and veranda with their views to the sea, the staircase to the roof terrace, and the six rooms and suites on either side, half with private gardens, the other half with private terraces looking out across the fields. 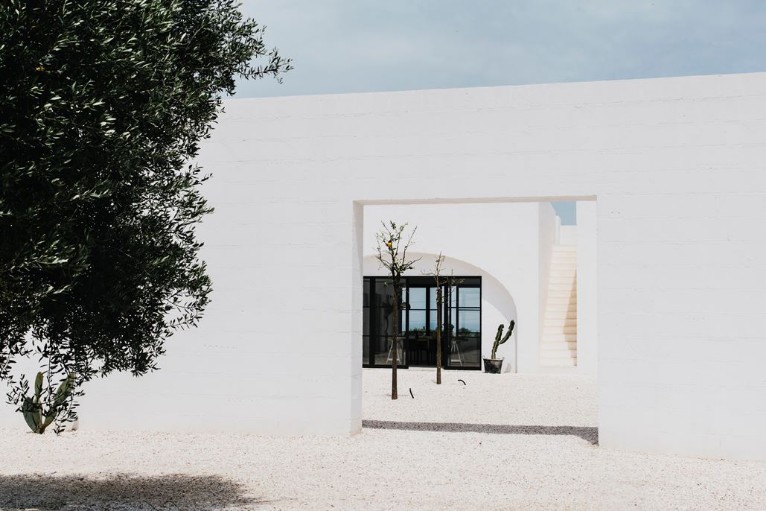 Vaulted ceilings and stone floors keep the inside cool on even the hottest days. The communal spaces encourage the kinship of community, while providing many intimate nooks for moments of simple solitude, both inside and out, including the living room, the veranda with its outdoor kitchen and bbq, the spa and gym, and the large pool. 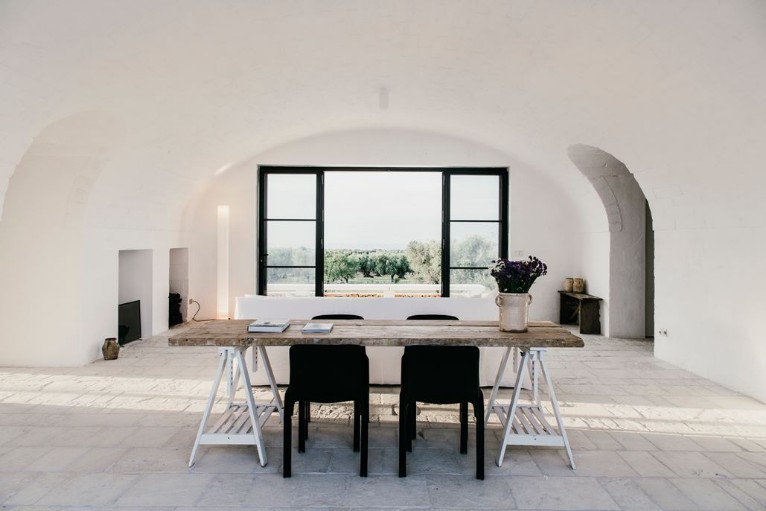 Torre Coccaro is a Masseria set in a vaste estate overlooking the sea dating back to XVI century. Surrounded by olive groves more than 800 years old, almond trees, carob trees, this tower used to be part of a line of defense of towers watching the invading Saracens, now has been restored in a 5 star country house.

In the main courtyard there is the original chapel from 1730, still holding mass and used has a point of pilgrimage for the fishermen living in the little coastal village of Savelletri. 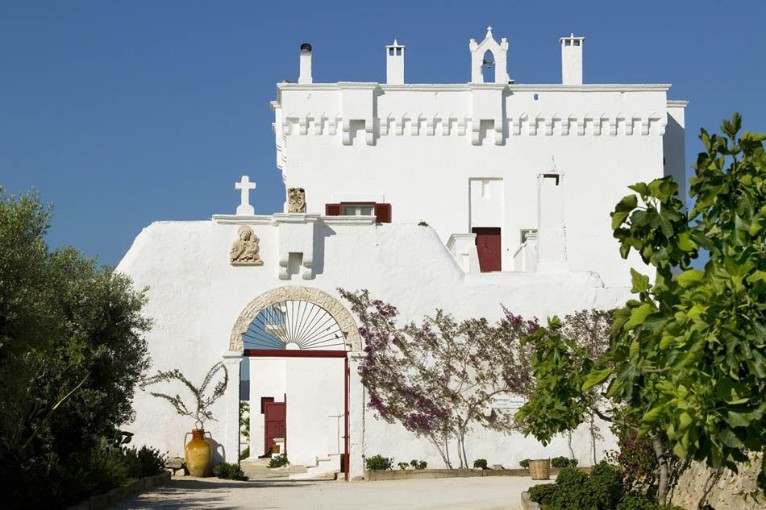 On the terrace of the tower you find the old pigeon tower used for sending messages during the wars. In the huge caves there are the old olive mill and the sheep quarters dating back to the year 1000. 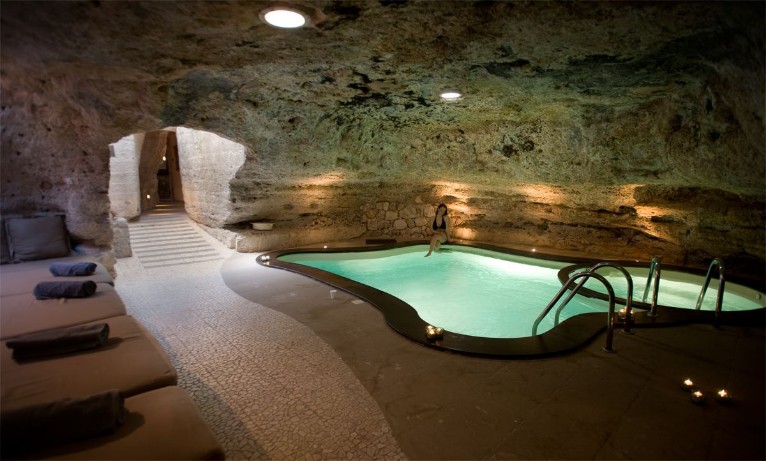 The Original Tower used to be a watchtower overlooking the sea for  the saracens invasions, it belongs to aline of defense starting at the gargano peninsula going all the way down to santa Maria di Leuca the “finibus terrae”.
The pilgrims and the monks used to take refuge inside the fortified walls of the Masseria, the old Church dating back to 1730 still is a set for a procession coming from the old village  of fishing village of Savelletri to the Masseria. 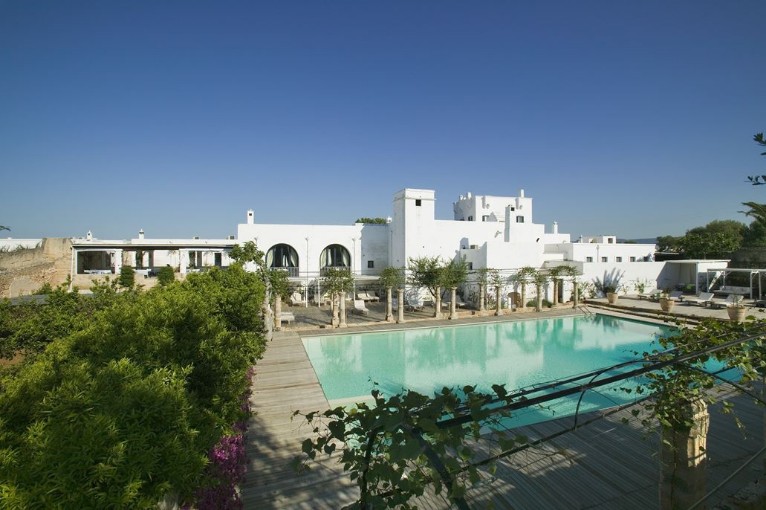 The monks also created our “ortus conclusus” an orchard full of vegetables and fruits used for when the workers used to stay for long time inside the property under siege.
You can find also the erbarium with all the plants used for the tisanes and the treatments now used in the SPA.
There is still the old pigeon tower from were they used to send the messages between the masserias. 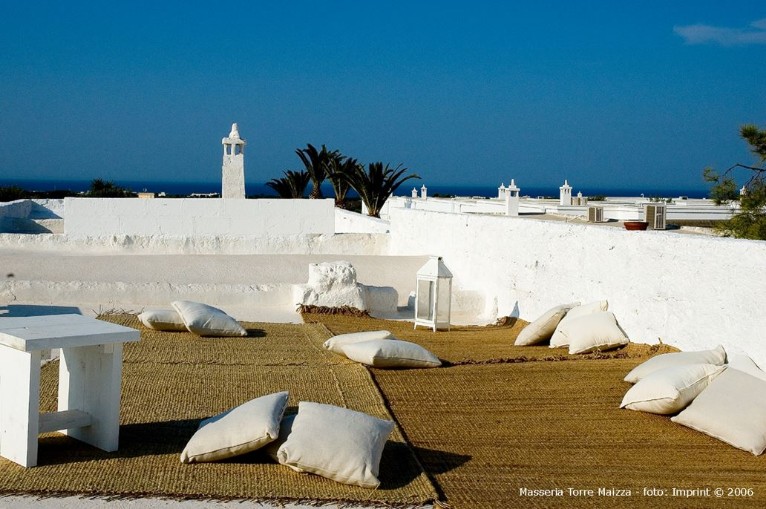 Masseria Corte degli Asini is about seven hundreds square metres wide, is surrounded by a forty acres wide olive grove, and is one hundred and thirty metres above the sea level. This altitude guarantees the best weather Apulia could offer. 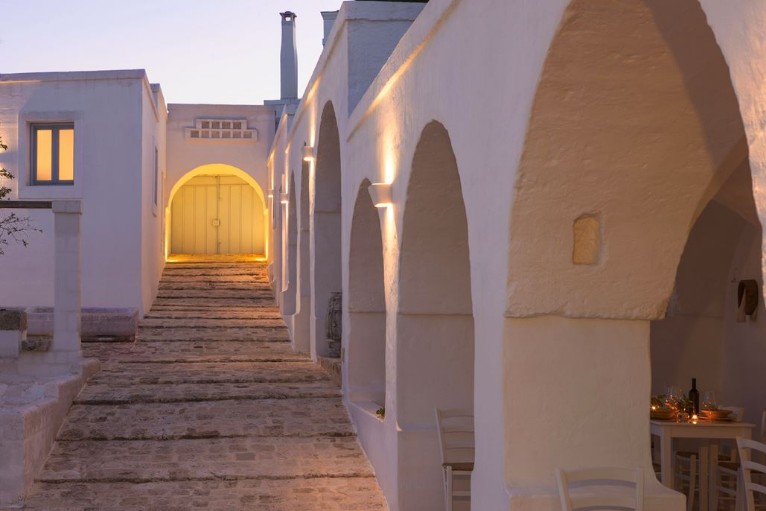 Provided with bright rooms which are made from ancient stone, and restored in full compliance with the historical ninenteenth-century shapes, with wide green spaces, with a peculiar agrumeto, with a large inner court the magical atmosphere of which recalls the history of Mediterranean, and with a majestic swimming-pool with a panoramic view on the valley of Fasano, Masseria Corte degli Asini can offer incomparable moments of relax. 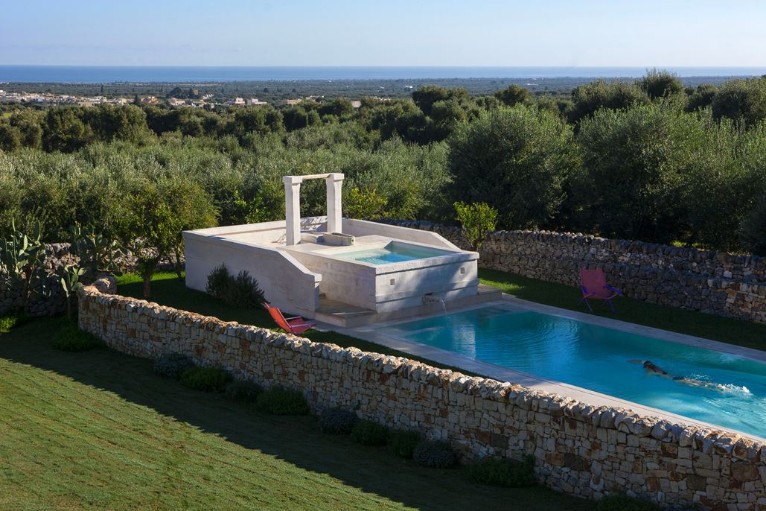