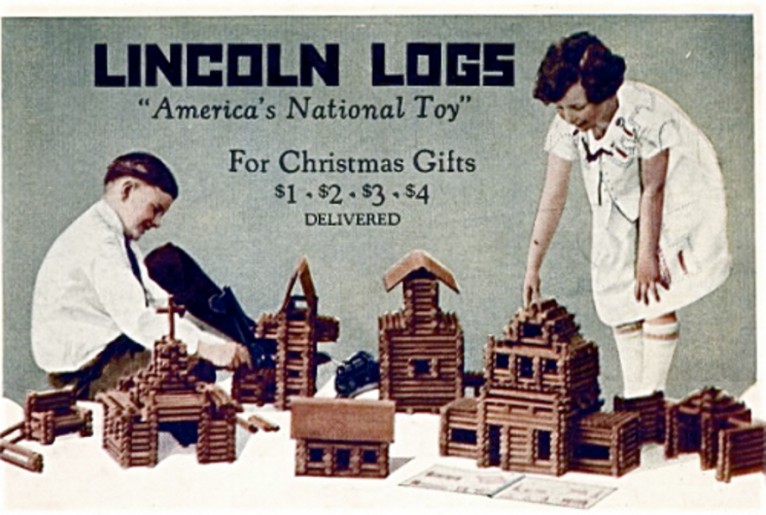 Over the last 150 years or so, there have been many types of kit for budding architects and designers, in many materials and styles, all designed to allow their lucky owners to create castles, houses, churches, railway stations, offices, factories or whatever they could imagine.

A present from his mother laid the foundation for 9-year-old Frank Lloyd Wright’s lifelong interest in architecture. “I … played with the cube, the sphere and the triangle,” he wrote about the blocks — originated by Friedrich Froebel, the father of kindergarten — that his mother had picked up at the Centennial Exhibition of 1876 in Philadelphia, the first World’s Fair in the United States. “I soon became susceptible to constructive pattern evolving in everything I saw. I learned to see this way, and when I did, I did not care to draw casual incidentals of nature. I wanted to design.”

Today, an english electrical engineer has created an online archive of architectural construction toys — divided into different categories — named Architoys, with the aim to share his enthusiasm for these building sets, document all the ones he know of, point to further sources of information and to help us identify sets we have at home or just to remember.

Discover these architecture-inspired toys from around the world, from replicas of Wright’s blocks to the latest construction kits and dollhouses! 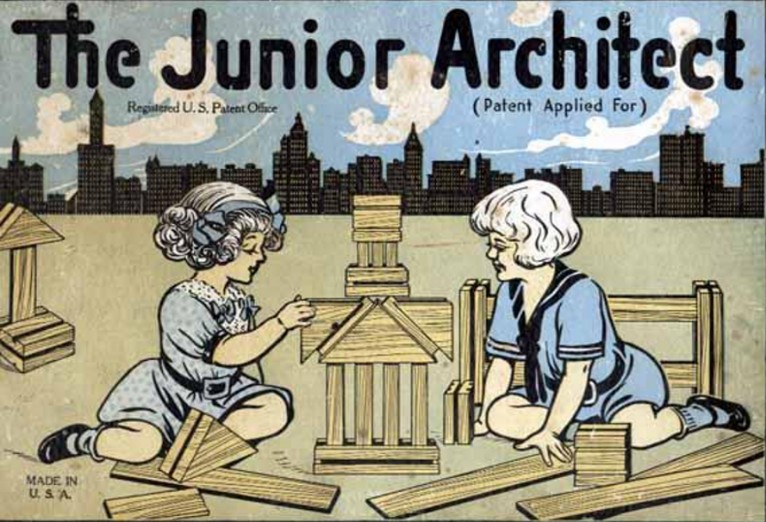 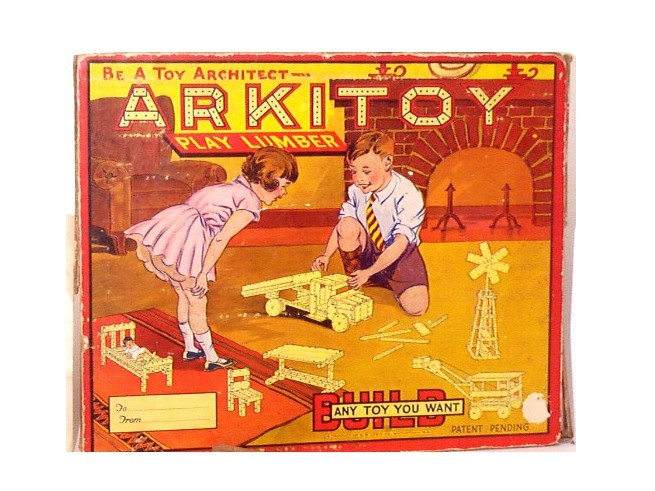 Blocks with holes which connect together by means of dowels. Not specifically an architectural toy, but can be used as such. 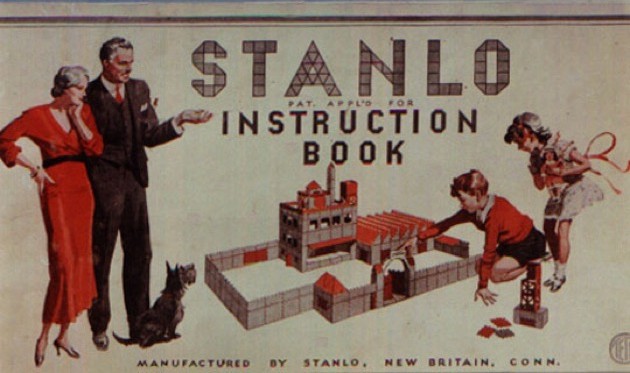 Metal plates which connect together.

Hard red plastic wall panels with studs top and bottom which connect together by means of softer white plastic beams with holes. Flat green panels wiht studs at the corners form the roof. Wall panels come in a variety of designs, including different windows and doors. Green balconies clip onto windows. 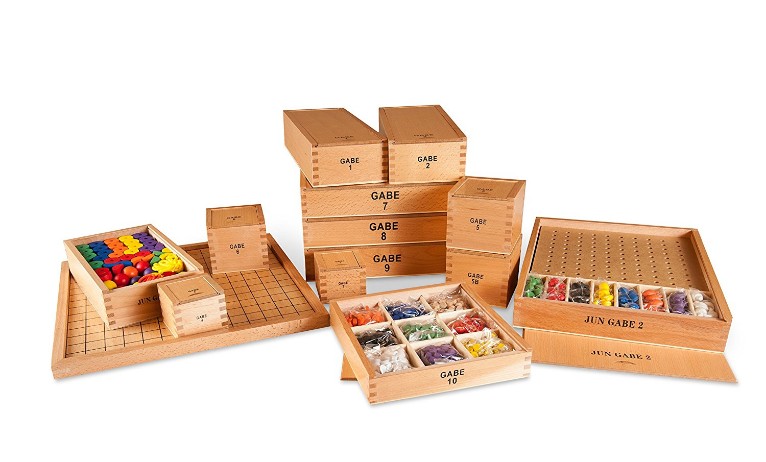 Wooden stacking blocks based on the idea of the german, Frederich Froebel, who pioneered the concept of the kindergarten in the late nineteenth century. 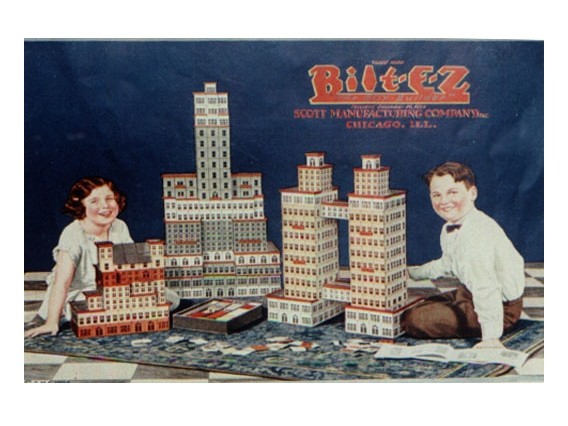 The parts are all painted metal and the buildings produced are essentially collections of cubes. The parts connect together by means of tabs which project at right-angles from the top and bottom of the wall pieces and slip into the edges of the roof/floor parts. Balconies and lengths of roof edging are also attached with tabs. 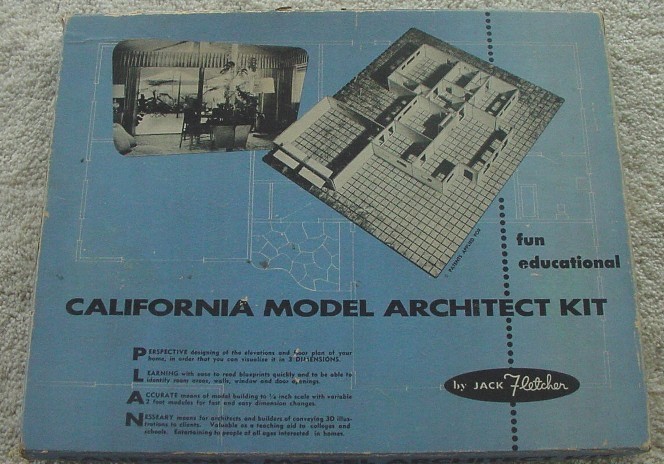 Card wall panels in a wide range of lenghts, either plain or with window or door appetures, which slot into a grooved wooden baseboard as shown on the box lid below. 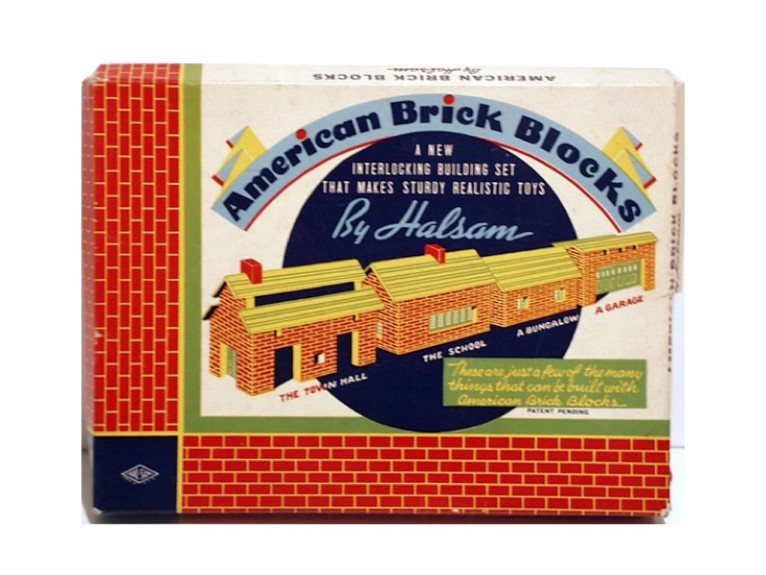 Wooden blocks with a brick design on outer face. Most blocks have a stepped end to allow overlapping at corners. Blocks have longitudinal groove along upper and lower face which allows them to be fastened together by small slips of card. Card windows and doors have side tabs at the top to also fit into these grooves. Roof boards attach to angled gable blocks by same method. 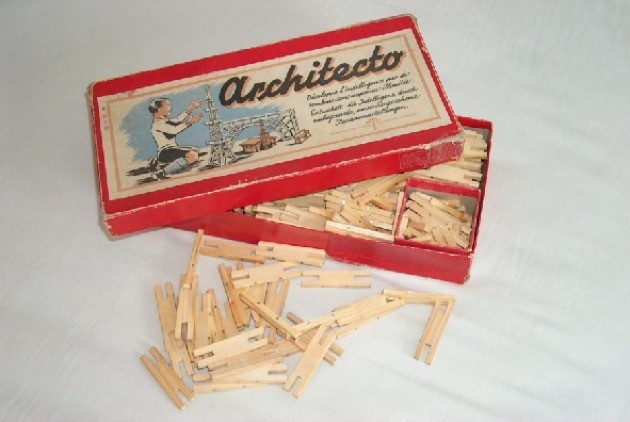 Wooden slats with notches in the ends to allow friction interlocking with other slats.

Artifical stone stacking bricks with a brick pattern texture on the edges of some blocks.

Building logs of similar designs had been produced by several other toy companies since the civil war but John L. Wright's version was very successful from the beginning and has remained so to this day.