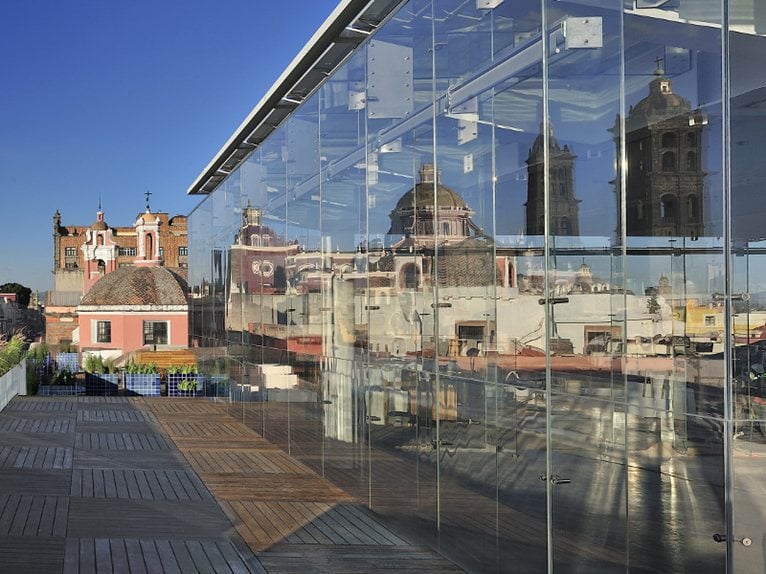 22/02/2013 - Boasting a modernized vestibule full of natural light, a terrace with a magnificent city view of Puebla, and new spaces for temporary exhibitions, the Museo Amparo proudly announces today the conclusion of the first stage of the refurbishment project, by TEN Arquitectos, offering the community of Puebla and national and international visitors state of the art facilities and cultural services.

During a press conference, Ramiro Martinez, Executive Director of the Museum, expressed his satisfaction and pleasure at formally presenting the work concluded in the areas that this stage of the project comprises. The project is the work of Mexican architect, Enrique Norten, of the firm TEN Arquitectos, also present at the press conference.

He stated his conviction that the refurbishment of Museo Amparo will position the Museum as one of Mexico’s new architectural icons, reinforcing its position as a model cultural center, which in turn will boost the interest of both national and international tourists to visit the city of Puebla.

During the presentation it was explained that the areas that this stage encompassed are the vestibule, the temporary exhibition halls, the work vault, the auditorium, the library, the gift shop, the coffee shop and the terrace. The idea was to optimize functionality and ensure that these spaces offer state of the art facilities for the enjoyment of the public.

Ramiro Martinez mentioned that all spaces were equipped pursuant to current international parameters on exhibition, conservation and security; this endeavor has gained the Museum the necessary features for receiving a broad array of collections on loan from national and international museums.

The vestibule –now transformed into a great cube of light− rises up into a transparent cover that leads the eye to the majestic sky of Puebla. This is the starting point when visiting the Museum.

The vestibule leads to the halls that house the temporary exhibitions. The far end leads to the terrace and the new coffee shop, offering visitors a beautiful scenic city view of Puebla.

The library and auditorium, also connected to the vestibule, offer exceptional facilities for visitors to take part in academic, research, cultural and entertainment activities offered by the Museum.

The vault and other areas closed to the public –vital for safeguarding and moving collections− was installed with the very best equipment available to guarantee the conservation and safety of the works of art.

Worth mentioning is that during the opening of this initial stage, the Museo Amparo pays homage to one of contemporary photography’s iconic figures: Graciela Iturbide, offering the exhibition unportrayability / illegibility/ instability by artist Melanie Smith in collaboration with Frida Mateos.

As of February 24, visitors will enjoy these spaces free of charge through Monday, March 4. During this period, the Museum will open daily, including Tuesday, February 26, from 10 AM to 6 PM. For the Evening at the Museum, on Saturday March 2, hours will be from 10 AM to 10 PM.

The project was conceived of from the very beginning for delivery in three stages; more than 30 million USD will be invested, one of the major investments for culture in Mexico in recent years. Most of the investment funds come from the Board of Trustees of the Amparo Foundation, which in turn received funds from the Federal Government through the National Council for Culture and the Arts (CONACULTA) and the Government of the State of Puebla.

The following two stages are projected to conclude during the second half of 2013 and entail refurbishment of the halls and accompanying texts for the permanent collection of pre-Hispanic art (1,285 m2), as well as temporary exhibition halls (1,848 m2).

At the end of the project the museum will have expanded its space by nearly 3000 m2. An expected 15% annual increase of visitors is projected during the first two years, with a sustained 8% for the following three years.