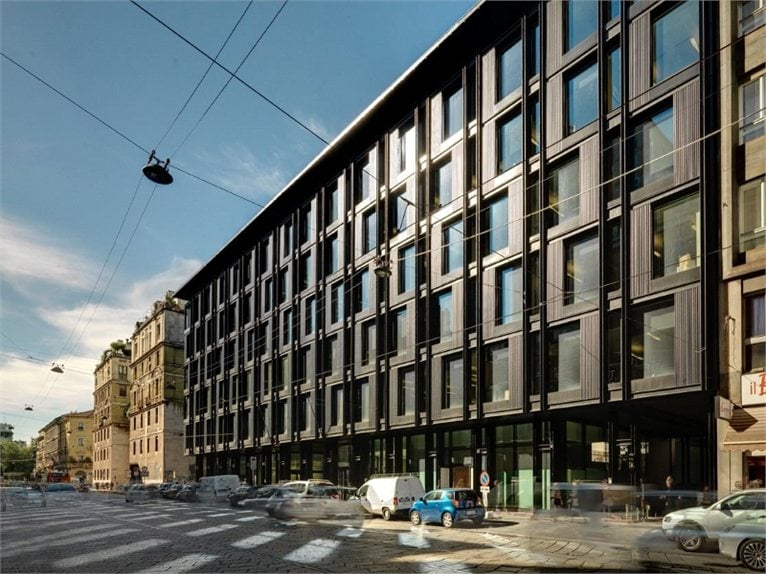 Park Associati has recently completed the refurbishment of the 'La Serenissima' building, better known as 'Palazzo Campari', designed in the '60s by Ermenegildo and Eugenio Soncini in the heart of Milan. Commissioned by Morgan Stanley to convert it into a headquarters, the building was constructed, like many others, in the years of the economic boom. They represented a new communicative power of Italian industry.

“Characterised from the outset by the burnished colour of the structural metal of the façade, by the tinted glass of the curtain walls system and by the metallic vintage brown painted panels in the smaller building of via Cavalieri dedicated to residential use, the building could be considered, for its age, modern and technologically advanced and even experimental. Today, many of its undeniably charming aspects have, however, proven poorly related to the dynamics of constructive and regulatory adaptation. For this reason, the new owners have chosen to work, together with the designers, towards restyling of the complex, conscious of its evocative strength and its excellent workmanship.

In compliance with the initial layout, the designers chose to work on maximum flexibility in the subdivision of the interior spaces with a uniformity of reading also provided by the internal lighting system and by optimization of the access systems to the building and of the vertical distribution.

Other key elements in the design were the recovery of space on the ground floor, as well as a global rethinking of the structure of the fronts, which are now much more open and vibrant, especially on Via Turati and part of Via Cavalieri. With an overall retreating of the façades with respect to the original perimeter, it was possible to eliminate the so-called 'thermal bridging', not originally taken into consideration, and move the usable area permitting the creation of new parts on the ground floor, now used for services, while maintaining the green courtyard, the heart of the original design, reinterpreted in a lucid restructuring.

The new façades make this operation the key aspect of the project. On via Turati perforated and press-folded burnished aluminium boxes (night lanterns) are used in a way that provides the new remodulation of the façade also to ensure maximum flexibility in the division of the interior spaces. In the courtyard, the dialogue with the garden is experienced by the intimate relationship between indoors and outdoors, on via Cavalieri the original lower front in direct dialogue with the nearby Cà Brutta, is dry and flat, with a predominance of the grey coloured, entirely glassy, smooth surface reflecting the historical landscape that it belongs to”.