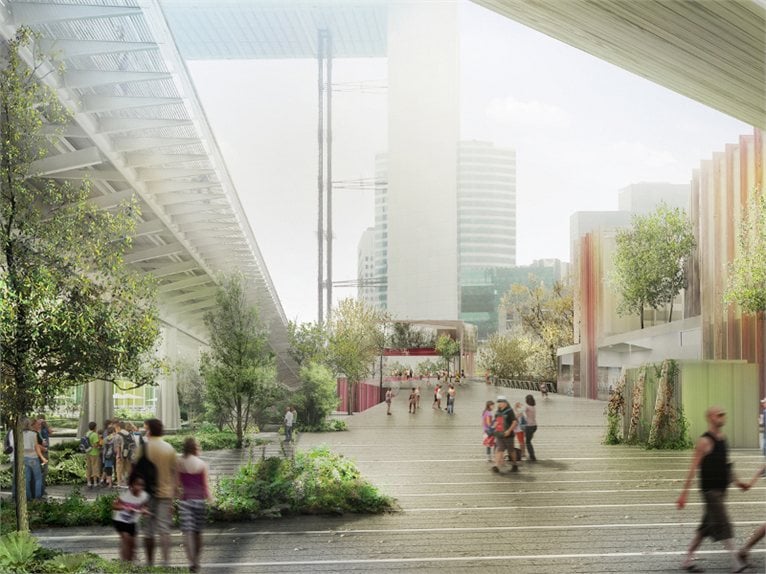 18/12/2212 - AWP, Office for Territorial Reconfiguration, was named general contractor for the Jardins de L’Arche, the landscaping of the public spaces and follies situated at the foot of the Grande Arche in July 2011.

The site, located near the future Arena 92 in the Jardins de l’Arche neighborhood, serves as a space for genuine interchange between La Defense and Seine-Arche. The urban planners and designers at AWP are also responsible for a guide plan for Defacto that will enhance the urban space of La Defense’s business district.

The project site is spatially very complex. The A14 route, metro line 1 and the RER A run underground, while above ground are the existing Jardins de l’Arche landscape project and Jetty. The aim is for the scheme to support the upcoming urban planning changes to the neighborhood: Terrasses de Nanterre, the Arena 92 stadium, residences and hotels. Each element of the Jardins de l’Arche project, which covers approximately 70,000 m2 and includes a ramp nearly 750 m long, contributes to an improved urban experience. The continuous and fluid ramp allows for a more fluid space, while the extensive garden encourages a re-thinking of the existing landscape as a “sanctuary”, a place that should be protected. New follies, multi-purpose spaces and small-scale buildings increase and “activate” the possible uses of the site.

The principal objective is to create an architectural, urban and landscaping continuity between the newly developed and existing urban spaces. Central to the project are the following goals: recreate an exceptional urban offering/provision on a neglected site between the Terrasses of Seine-Arche and La Defense; create an attractive and lively space on the scale of the Parisian metropolis; generate an urban culture and communication between La Defense and the surrounding neighborhoods; reinforce the ties between this area and the heart of the city, by improving circulation and fluidity; reveal and give new value to the inherent architecture within a harmonious urban landscape. This is one of Le Grand Paris’s major public urban spaces. The major priority is that the site creates a link between two sections of the Seine, asserting its presence at their meeting point. This linking superceeds any private or local issues about the space and perhaps even influences the way these issues are addressed. We’ve approached the site by feeling it out in its nocturnal aspect, searching for a new intensity of landscape that can become a key image for Le Grand Paris. We are approaching the project as one might approach a “place de l’Opera”: Arena 92 is a new type of concert hall. The site is, however, full of constraints, because of its exiguity, the presence almost on site of two signature, ‘heritage’ works (Gilles Clement, Paul Chemetoff & Marc Mimram), and because of the huge expected visitor numbers. A part of the design then may be “virtual,” a luminous, sensitive, interactive, temporary presence…

Our vision at this stage is to develop spatial continuity with as few individual elements as possible, to bring the numerous small urban projects into an integrated, harmonious and stimulating whole (3): a large, contemporary plaza; flux zones that highlight the Jetty and the Jardin de l’Arche; and a common vocabulary across the project, such as spatial and temporal modularity in kiosks and follies, that makes the area accessible to all.

As a veritable link between La Defense and Seine-Arche, the Jardins de l’Arche are situated at the point where multiple neighborhoods meet: La Defense to the east, Les Groues and the Faubourg de l’Arche to the north, the park Andre Malraux to the south and, to the west, the Terrasses that extend Paris’s historic axis to the Seine. On a site that covers eight hectares, this new neighborhood’s development benefits from the construction of Arena 92, a multipurpose stadium, so as to become a center of urban life that combines the hospitality industry, residences and ground floor spaces intended for leisure activities and urban services.

The Etablissement public d’amenagement de La Defense Seine Arche (EPADESA, Public Establishment in Charge of the Development of La Defense Seine Arche) heads the studies and implementation of one of the major urban projects of the Parisian West. The 564 hectare perimeter of the operation d’interet national (OIN, national interest operation) includes the cities of Courbevoie, Garenne-Colombes, Nanterre and Puteaux. The presence of the premier European business district, also the object of a plan de renouveau and of the Seine Arche recomposition and development project, accounts for this national interest. The latter project, which is structured around 20 terraces that will extend the historic axis, is already under way. This area is intended to host future transportation infrastructures: Grand Paris Express, LGV train station for the Normandy lines and the continuation of Eole to the west.