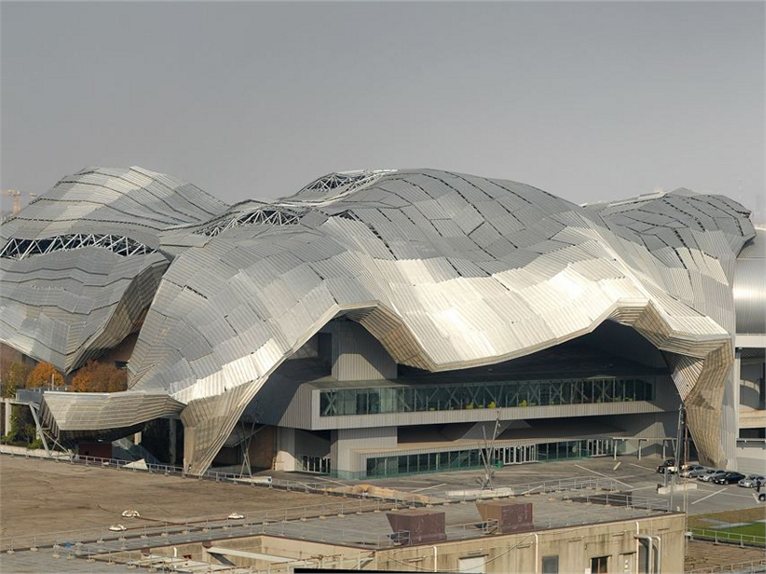 Mario Bellini's “comet”, as he himself calls MiCo - the new Milano Convention Center, the largest in Europe, has just been opened.

A sort of “earthquake in volumetric terms” which required a strong architectural intervention and generated the silvery airy 'comet' which surmounts and embraces the new building head together with part of the flanks and roof of the building created by Bellini between 1993 and 1997.

The comet – which overlooks a complex blend of metal and glazed volumes with spectacular 180° views of the city – will light up from dawn to sunset because it can reflect sun and clouds, and at night thanks to a balanced presence of lights. The swarm of luminescent rays ripples from the denser nucleus of the bulkhead and forms a 200 metre long tail. It renews and revolutionises the stylistic code of the New Department of Islamic Art at the Louvre in Paris, which was also designed by Mario Bellini and opened in September 2012. A strong sign that the designer hopes will become the landmark of the new Convention Centre capable of communicating with the new surrounding urban areas.

In Mario Bellini's words: “I worked on the Portello exhibition area between 1993 and 1997 and just 15 years later this important part of the city was in danger of ending up as industrial archaeology. However, I was given the chance to bring my creation to life a second time: a privilege, because it is not often that an architect gets such an opportunity, to re-think and re-imagine their own work. It was a tremendous challenge added to the simultaneous construction site at the Louvre in Paris, the Department of Islamic Arts officially opened earlier this year by President François Hollande.

The new Congress Centre ( MiCo ), consisting of a graft of metal and glass bodies – three tapering foyers on different levels – with spectacular 180 degree views over City Life, concludes the old building head which has remained incomplete until now, while an unexpected asteroid-auditorium floats beside it on a crown of pre-existing columns.

A real earthquake in volumetric terms which was required for the new use consequently required a new archaeological synthesis. The result is the invention of an airy comet which surmounts and embraces the new building head, like a silvery cloud, together with part of the flanks and roof of the building. Thus pre-existing architecture has been recycled and transformed into a new creature, unusual, yet still consistent with the whole complex.

The whole Portello complex only expresses its original potential of “inhabited bridge”: 800 meters of urban pergolas, grafted on the Green Ray no.8, will connect the area of the old Trade Fair (City Life) with that of the new Portello North quarter up to Monte Stella and beyond.” “My hope is that the MiCo will become a landmark of the city, my city, a strong sign that characterizes a place and a neighbourhood. All this in Milan that does not have many landmarks that are also, where possible, innovative."

This new and irreverent comet lives off its own light during the day because – thanks to eight thousand reflective aluminium flakes – it reflects sunrises, clouds, fog, sun and sunsets. An infinite number of postcards to remember a great and ever-changing urban sculpture in Milan. At night it comes alive with a calibrated intervention of led lighting and continues to be a landmark and a reassuring reference point for the entire neighbourhood, a "2.0 comet".