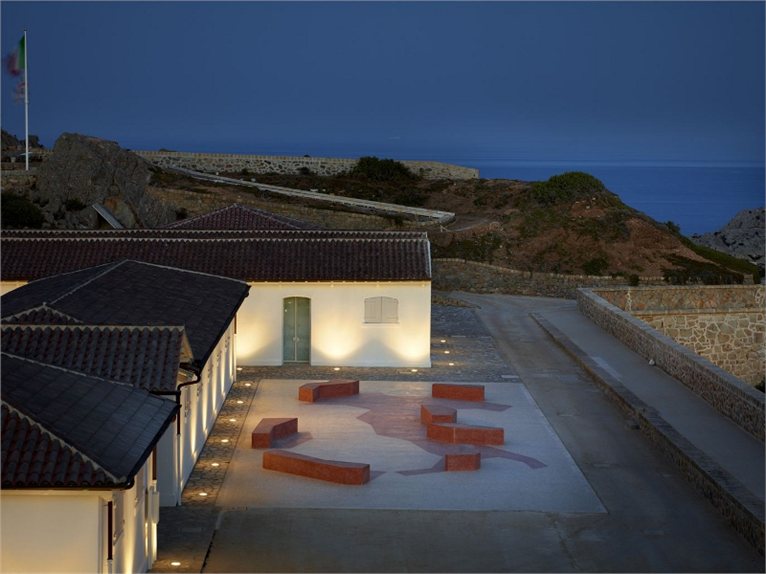 The Giuseppe Garibaldi Memorial opened on 15th July on the island of Caprera and will remain open to the public until December 31st. The architectural project of restoration, setting up a museum exhibition and art direction have been carried out by the architect from Lucca Pietro Carlo Pellegrini.

To celebrate the 150th anniversary of the Unification of Italy, the President of the Council of Ministers set about recovering some of the most historically significant sites on the peninsula with the “Places of Memory” project, giving them a tangible collective memory. The action to recover Fort Arbuticci on Caprera, a nineteenth-century fort that was home to operative military structures for defending the fleet of the Italian Navy until the Second World War, was part of this project.

On the island which symbolises Garibaldi, as he spent the last years of his life there, a project has been carried out that integrates the restoration and conservation, with a contemporary design research project which dialogues with the historical and architectural tradition of the place. In the disused fort, it was decided perform a 'building in a built area' intervention to create a site dedicated to the figure of Giuseppe Garibaldi, that follows the events of the extraordinary life of one of the emblematic figures of the Italian Risorgimento.

Starting from a thorough historical and technical knowledge of the environment and architecture, “this creative restoration project proposes a new interpretation of the signs and stories of history, which inevitably intertwine contemporary signs and stories. The result is a continuous conversation between architecture and environment, between formal design and state of the places.”

The Garibaldi Memorial is designed to accompany the visitor on a journey through the places and events in the life of the General, the South America of struggles for freedom, the Africa and China trade journeys, the United States of exile and of waiting, Europe, his Italy, and finally Caprera.

Places, events and movements of people and vehicles, narrating an extraordinary political and private activity are reconstructed through the exhibition panels, which recount the chronicles of his lively existence like the pages of a book, through the details of important paintings and specially designed showcases, showing important historical documents and collections, especially the Birardi collection and, finally, with the help of multimedia and interactive installations.

The restoration project respects the memory of the places and enhances the existing architecture with soft and lightweight interventions which restore vitality to the buildings. The artefacts retain their original constructive and typological characteristics, to which contemporary details that lend elegance to the whole complex are carefully added, giving it a new look. The exterior masonry walls have been restored and the four exhibition and services buildings are plastered and painted white, the new metal window and door frames have screen printed windows with the face of the General, and help the visitor to follow the thread of the exhibition.

At the entrance to the fort, a corten steel gate whose bearing structure is formed of the repeated words “Giuseppe Garibaldi, the hero of the two worlds”. It is followed by a monument in corten blades, with the words “Giuseppe Garibaldi Memorial” to greet visitors and mark the face of the Hero of the Two Worlds, painted on the side of the services building. Opposite the four exhibition bodies, there is Piazza Italia, a public sculptural space, a symbolic homage to commemorate Italy, Garibaldi and the 150th anniversary of the Unity, but it is also a work dedicated to the future: “a work-sign so as to never forget”.