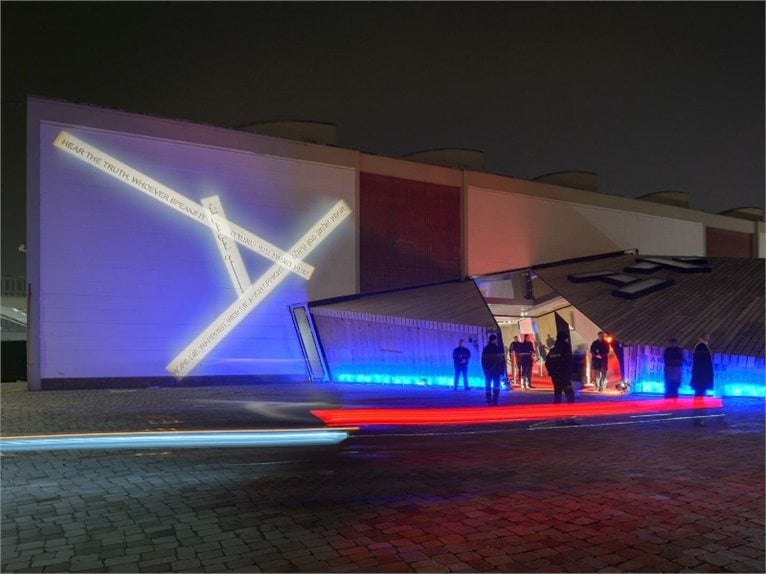 Last Saturday, November 17th, The Academy of the Jewish Museum Berlin, designed by Daniel Libeskind, was officially opened, almost twelve years after the museum itself was completed and after the glass Courtyard, finished in 2007.

The new structure, which covers an area of 25,000 square meters, has been created in the former flower market, located just in front of the museum to house an archive, an education centre, an auditorium and also a library.

This is what Libeskind said of his work at the official opening of the building: “My ongoing collaboration with the Jewish Museum Berlin is a source of tremendous professional and personal pride. Each project offers a fresh chance to illuminate Jewish history and culture, to understand the tragedies and the triumphs, and to celebrate the resilience, creativity and erudition that have been Jews’ enduring legacy.”

The catalysing element of the visitors' attention is the warning impressed on the façade, alluding to the teachings of Moses Maimonides, the medieval Jewish philosopher, translated into five languages (English, German, Hebrew, Arabic and the original Judeo-Arabic of medieval Spain): “Hear the truth, whoever speaks it”.

Designed as an extension of the Jewish Museum, in themes like in the structure, the new creation has an entrance body in a sectioned cube-shape standing against the wall, lit by two large skylights that reproduce the shape of the Hebrew letters Alef and Bet (A and B). The entrance leads to the two larger regular-shaped volumes that host respectively the library and the auditorium.

The use of pine wood refers to the crates used to transport books and precious objects and, at the same time, the 'biblical' envelope of Noah's Ark.

“In-Between Spaces” is the name that Mr. Libeskind has given his design and it describes the transitional area among the three cubes. It also alludes to the different perspectives offered by that unique vantage point, which allows the visitor to look into the hall and out on to museum’s other structures and spaces, while standing on that spot.