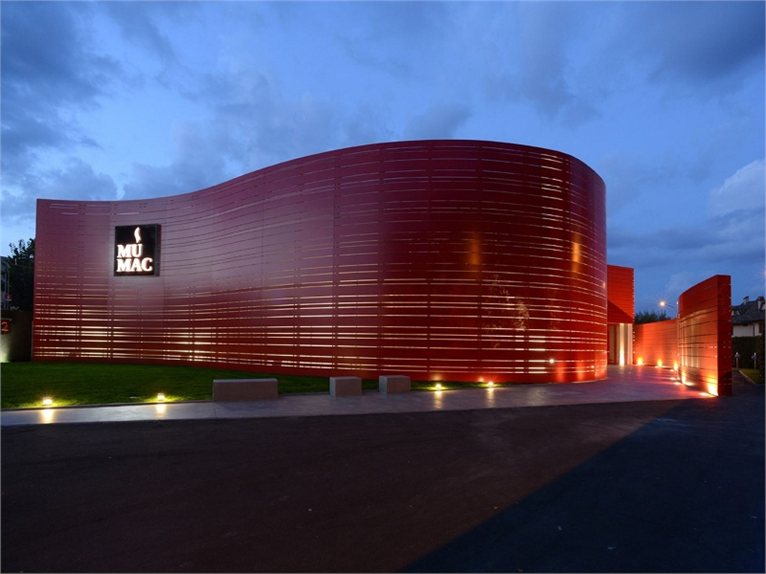 Designed by architects Paolo Balzanelli and Valerio Cometti for the hundredth anniversary of the Cimbali Group, the MuMAC, Coffee Machine Museum, which opened on October 12th, tells of 100-year history of these wonderful objects.

The façades of the museum are covered with “Cimbali red” metal strips in a sinuous and enveloping way like the waves of a hot espresso coffee and at night the artificial light filters through the strips creating a striking illuminated grid which makes the Mumac pulsate with energy.

The MuMAC is located in the Binasco plant of the Cimbali Group inside the building previously used as a spare parts warehouse and covers an area of 1,800 square meters, within which there is the museum area, an area for temporary exhibitions and one dedicated to the coffee culture.

The exhibition itinerary of MuMAC is designed as a journey through the ages: Dawn, rationalist period, Invention of the lever, under the banners of design, international dimension and the New Millennium. Each room corresponds to a characterized time interval, envisages large introductory panels regarding the historical period, is enriched with photos, advertising posters of the period and characteristic objects and, of course, houses the fully functional machines often included in fascinating reconstructions of environment. Finally, the touch screens, situated at the entrance to each room, invite interactivity and offer the right explanations to visitors who pay more attention to documentary detail and are interested in stories on the industrial background.

The project theme was to create architecture with strong merits and highly characterized, without completely concealing the existing building, but by enhancing the fully operational industrial environment in which it is set.

For visitors to the Mumac a new entrance has been created through which you can access an area marked by a complex coffee-coloured partition. The back wall of the partition is marked by nine trees which divide it into 10 equal-sized spaces: ten decades symbolizing a hundred years of existence and success of LaCimbali. A new façade of curved “Cimbali red”-coloured metal slats, anchored to the existing building, create a kind of large ventilated wall that accompanies the visitor in their itinerary towards the large entrance with its sinuous movement.

This delicate composition of curves and countercurves, that reminds of the warm waves of the coffee aroma rising from the cup when looked at from above, blends successfully with the diagonal geometry underlying the project and is also provides the main generator of the division of the interior spaces. The entrance has a design marked by vertical elements, in a successful contrast with the horizontal design of the metal slats.