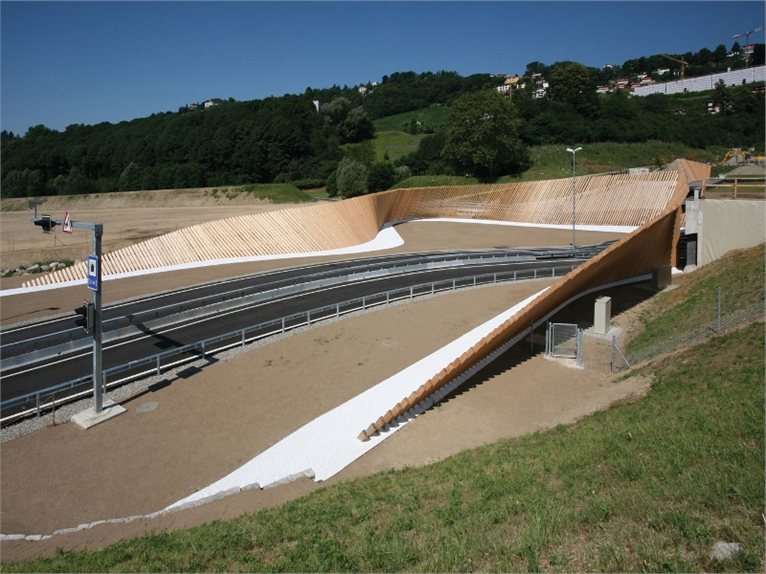 The city of Lugano, Switzerland, has just inaugurated a work of environmental mitigation at the entrance to the Vedeggio-Cassarate tunnel. So far nothing amazing, if it were not for the fact that they were designed by the famous Italian architect Cino Zucchi, who has created a true “environmental sculpture”.

“Tunnels are “wounds” inflicted upon the geology to facilitate human movement” states Cino Zucchi. “Their history is ancient, glorious and bloody, but techniques have now been refined to make digging them similar to an endoscopic operation.

The new Vedeggio-Cassarate tunnel, connecting the stadium area of Lugano with the Milan-Zurich motorway, has already triggered a strong urban transformation of the area, which will become the new gateway to the city from the North. Awaiting completion of the connecting works with the existing road, the entrance and exit to the tunnel on the Cassarate side needed a temporary arrangement to shield the structural work while waiting for the second construction phase to harmonize it with the surrounding landscape.”

A simple idea of a sequence of a series of fir wood poles with a rectangular cross-section of different lengths, is made complex by the potential control of the shape now possible through programmes of parametric design. A “grooved surface” (the geometric definition of a curved surface obtained through straight sections that rotate in space) moves in relation with the orographic constraints and with the kinematic vision of the drivers. A great sinuous “screen” that reaches the height of 10 meters and that changes from a concave to a convex trend, sometimes permeable to the eye and sometimes opaque depending on your viewpoint, creates a sort of “environmental sculpture” that identifies the entrance into the city. A path of white pebbles hides the point where the poles are driven into the ground, making all structural details disappear to make way for the pure perception of movement and play of light at different hours and seasons.

Cino Zucchi Architects, who some years ago had won the competition for the urban plan for the New Cornaredo District as a team with Federico Oliva Associati, Land and Class Group, oversaw the architectural design of this element of about 230 meters in length, while the executive project and structural consultancy was carried out by Mauri & Banci SA engineering office under the supervision of the Territorial Department of the Canton of Ticino (construction Division). The large wooden screen thus becomes a small but significant sign of future changes that will make this area the new gateway to Lugano from the North.