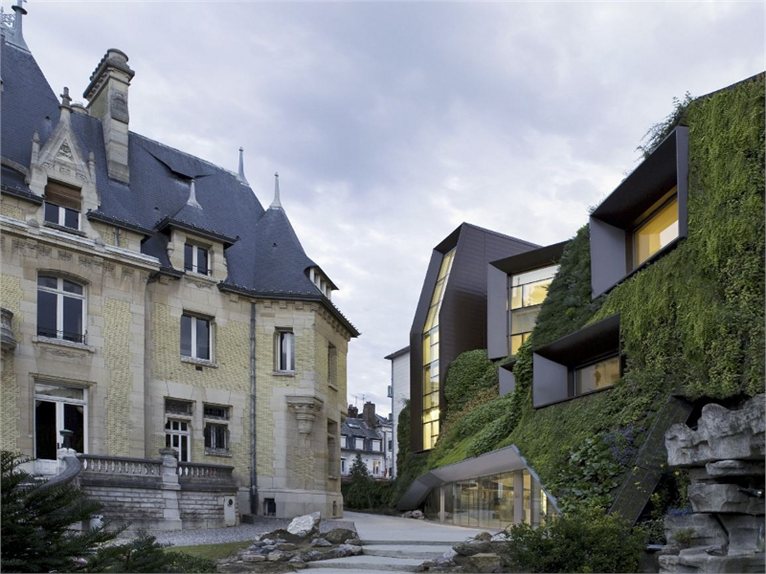 Parisian architects Chartier-Corbasson Architectes have recently completed the expansion of the Chambre Régionale de Commerce et d’Industrie Région Picardie (Regional Chamber of Commerce and Industry) in Amiens in the French region of Picardy.

The old hotel Bouctot-Vagniez, which houses the regional authority, is a remarkable building, a jewel of local Art Nouveau and bears valuable witness to twentieth century architecture. For some time, however, it had become insufficient to accommodate the functions of the Chamber of Commerce of one of the most innovative and vital regions of France. Hence the need for an extension which would be capable of enhancing the existing building.

All the public spaces (counters, halls, auditoriums ...) have been grouped into a plant-covered base linking the project with the existing garden and on which the other offices are “rested”. These are divided into two volumes separated by a narrow slit which allows air and light to enter the heart of the building.

On the southern side, facing the street, a double metal mesh skin allows ventilation and acts as shading, while providing more privacy inside the offices at the same time. On the other side overlooking the garden, however, the project provides a continuation with the existing landscape. The hall opens out onto the gardens, and the ground floor rises up to embrace a wide panoramic bay window creating a fluid, light-filled space.