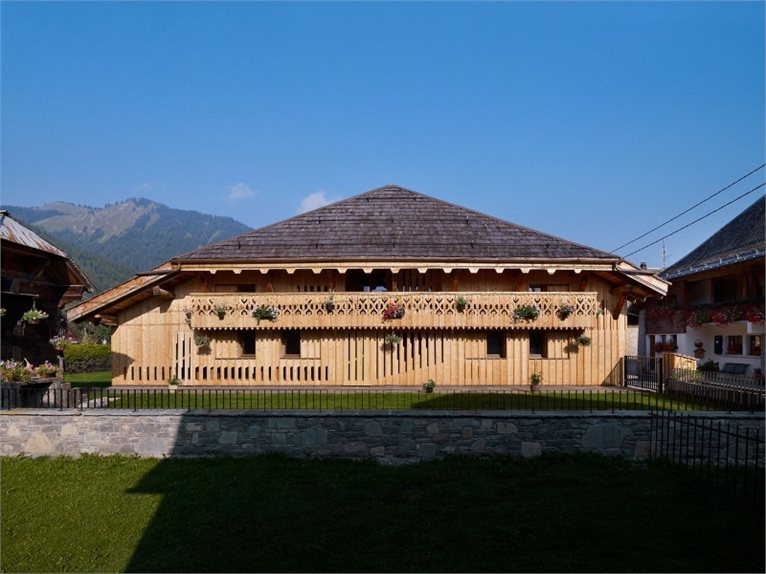 The Villa Solaire, by French architects JKA - Jérémie Kœmpgen Architecture and FUGA, is the result of the conversion of an old farmhouse in Haute Savoie into a luxury home. Built in 1826, Villa Solaire has been identified by the Town Council as a milestone of traditional architecture.

A uniform cladding surrounds the entire building. One of the challenges of the project was to preserve its appearance, by filtering light into the heart of the house. The traditional technique of decorative notches in wooden strips was used to perform the specific perforations in spruce wood planks. The contemporary design of the cut-outs is reminiscent of the disjointed battens used for the traditional hay drying barn. The cracks in the façade bring light into the building. The glazed elements of the project, flush with the inside of the façade, are partially hidden by the slats of the cladding.

Throughout the year, the roofs and the surrounding buildings cast their shadows on the façades. The pattern is designed to respond to the path described by these shadows: areas on which there is a higher incidence of sun are all more open and make it easier to see the continuity of the common areas of the house.

This interlocking interior/exterior is evocative of a lifestyle in harmony with the surrounding environment and has led the designers to call the project "solar house": a house exposed to the sun's path on the four sides, perceived as a sundial.

Inside, the idea is to go through the house amongst four "blocks" which are as stable as rock, located at each corner of the building. Each unit is a separate suite with bedroom and services. The remaining space between these four blocks is occupied by a succession of superimposed floors at different levels in a large space that houses the common areas: kitchen, dining room, living room, fireplace area... These four blocks 'mark' the house like the peaks dot the valley and the various levels within are a reminder of the topographical lines.