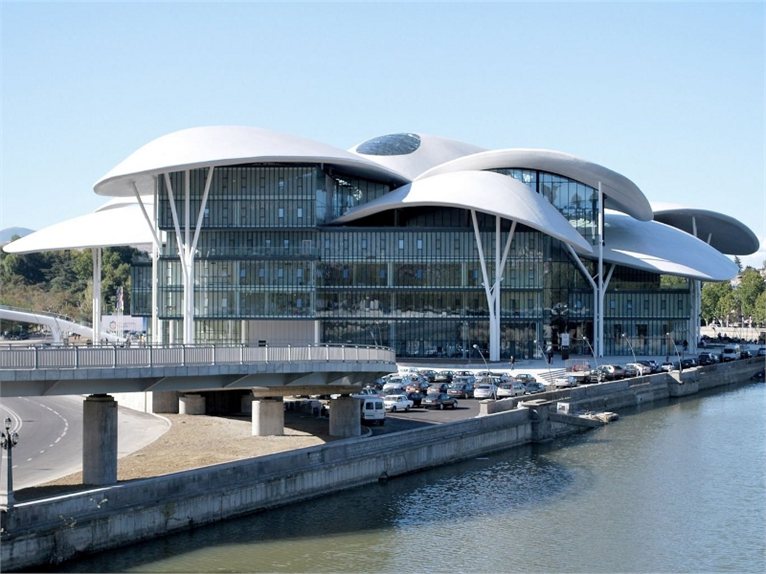 The Tbilisi Public Service Hall, designed by Massimiliano and Doriana Fuksas, is located in the central area of the capital of Georgia and from its position, dominates the river Kura.

The building consists of 7 overhanging volumes housing offices (each volume consists of four floors at different levels) arranged around a “ central public square”, the core of the project, where there are the front-office services.

The offices are connected by internal walkways that wind their way to the various levels. The overhanging volumes of the offices and the central public space are dominated by a cover of 11 large “petals” which are formally and structurally independent from the rest of the building. Three of the eleven petals cover the central space. The petals, different in terms of geometry and size, reach a maximum height of 35 meters and are held up by a structure of steel pillars with a tree shape (triads of tubular steel elements) visible, along with the petals, both outside and inside the building.

Between the petals, located at different heights, there are glass façades whose main characteristic is that they are completely released from the structure of the petals, allowing relative movements between the façade and the same roof coverage network. This choice was taken to prevent any movement of the roof, mainly due to fluctuations for snow loads, wind or thermal expansion, which may affect the glass.

The 42,000 sq.m of total built area includes the National Bank of Georgia, the Ministry of Energy and the National and Civil Registry.