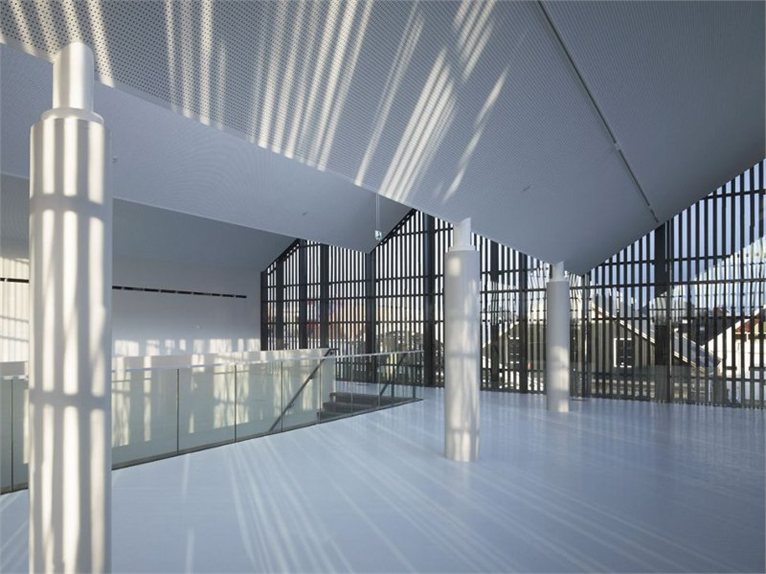 10/11/2012 - Kaap Skil, Maritime and Beachcombers Museum by Mecanoo Architecten, on the island of Texel, the Netherlands, has been nominated for the Wood Architecture Award 2012. This bi-annual award is an initiative by the Centre for Wood, recognising new techniques and creative applications of wood in architecture.

The museum is designed with four playfully linked gabled roofs which are a play on the rhythm of the surrounding roof tops, and seen from the sea, resemble waves rising out above the dyke. The wooden facade of Kaap Skil is a good example of the time-honoured tradition of recycling. The vertical wooden strips are made of re-used hardwood sheet-piling from the North Holland Canal and have been given a new life just like the objects displayed in the museum’s collection. The 25-year old wooden piles have been cut into strips by the local Texel sawyer Pieter Dros, yielding 10 kilometres worth. The un-sawn edges have been deliberately placed on the visible side of the facade. After 25 years of being under water the white, gray, rust red, purple, and brown colours are beautifully weathered.

From within the museum, the glass facade in front of the wooden structure allows an inviting view to the outdoor museum terrain and of the famous North Holland skies for visitors of the museum café. Inside the building the slats cast a dazzling linear pattern of shadows creating an atmosphere infused with light and shelter. Kaap Skil Maritime and Beachcombers Museum showcases a sizable collection of found objects from shipwrecks in the North and Wadden Seas. In the museum, the public is taken back in time to the Dutch Golden Age. The showpiece of Kaap Skil is an eighteen-metre long, four-metre deep model of the ‘Reede van Texel’ (the offshore anchorage of Texel), displaying in great detail the impressive spectacle of the dozens of ships anchored off the coast of the Wadden Island.