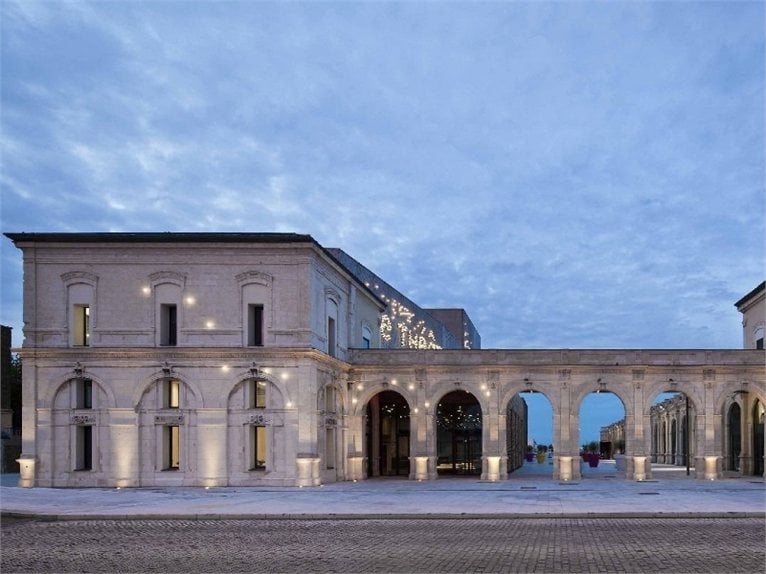 Parisian architects K-architectures is rapidly gaining international attention and the Le Théâtre Saint-Nazaire, which was officially opened on September 8th in the town of the same name on the Atlantic coast, can only speed up this process. All the distinctive features of the architectural office founded by Karine Herman and Jérôme Sigwalt can be found in it: a design that seeks to restore its narrative power to Architecture, starting from the meeting with a place, a territory or, as in this case, a building.

Sometimes these meetings are particularly interesting and the building that houses this theatre has a lot to offer, as it has lived though really illustrious periods. It is a former railway station that has hosted some of the world's richest traders and passengers of the great transatlantic ocean liners. During World War II, the building underwent heavy bombing that destroyed two-thirds of the city, losing its large glass gallery that welcomed the visitors.

In the restoration, this empty space also remains the main conveyor of the history of the place. As regards the two surviving wings, they mark the front of the new space dedicated to culture but remain independent. The designers have aimed to “close the circle” but have moved within the space, acknowledging the potential and history, or rather the stories that it could tell. The empty space in front of the theatre becomes to all effect the first theatrical space, with a curtain (the arches of the entrance) and backdrop (the new skin of the theatre).

It is no coincidence that the same elements that “mark” the concrete panels outside are also found in the main room, interpreted and reinterpreted in various ways, but with a great sense of continuity and unity. Perhaps a new concept of “total theatre” that is not so because each element is designed with a specific function, but because each element, also exists, it is re-read and re-interpreted to be part of the narrative.