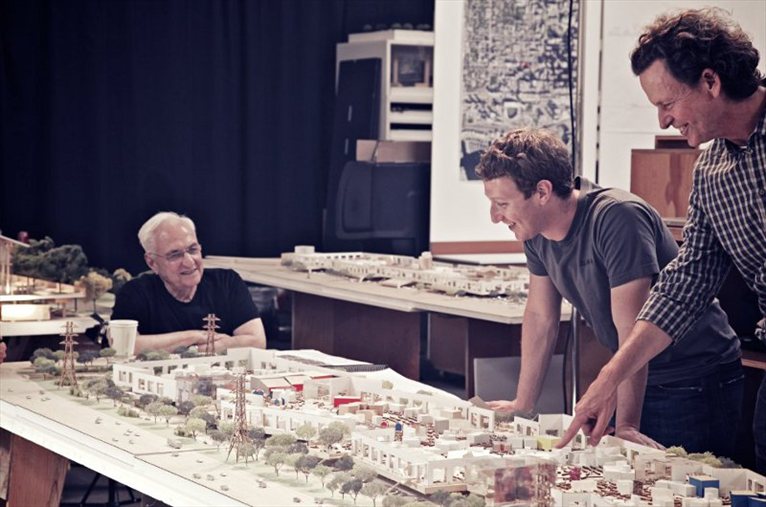 “A few months ago, I flew down to Los Angeles to meet for the first time with Frank and his team.  His office is a giant warehouse overflowing with handmade, wooden models juxtaposed with state-of-the-art architecture software (some of which is designed by Frank’s in-house team).  His teams are filled with people who are unbelievably talented and love what they do.  The whole thing reminded me of Facebook, so that when I met Frank, I already knew he was a perfect fit for us. Since his earliest work in the 1960s, Frank has risen as one of the most influential and prominent architects in history, with such accomplishments as the Guggenheim Museum in Bilbao, Spain and the Walt Disney Concert Hall in Los Angeles, California.   He’s famous for his ability to combine breathtaking architecture that takes into account the needs of his clients.

At every step of planning the new building, Frank has taken into account our engineering culture.  It will be a large, one room building that somewhat resembles a warehouse.  Just like we do now, everyone will sit out in the open with desks that can be quickly shuffled around as teams form and break apart around projects.  There will be cafes and lots of micro-kitchens with snacks so that you never have to go hungry.  And we’ll fill the building with break-away spaces with couches and whiteboards to make getting away from your desk easy.

We’ve paid just as much attention to the outside as well.  The exterior takes into account the local architecture so that it fits in well with its surroundings.  We’re planting a ton of trees on the grounds and more on the rooftop garden that spans the entire building.  The raw, unfinished look of our buildings means we can construct them quickly and with a big emphasis on being eco-friendly.   Of course, we’ll maintain our current campus and use an underground tunnel to connect the two.

We plan to break ground on the new building in early 2013 and hope for a quick construction. When it’s completed, we hope it will provide a paradise workspace for the 2,800 engineers who will one day fill it”.

Facebook sources say: “Frank is famous for his ability to execute on the wishes of his client while keeping his projects within their budget.  As such, the costs of the campus will be considerably lower than most of Frank's previous work.  This is especially true as the building is designed to be simple - almost like a giant warehouse, rather than a monument to Frank or Mark.  It's emphasis is on functionality, rather than extravagance”.