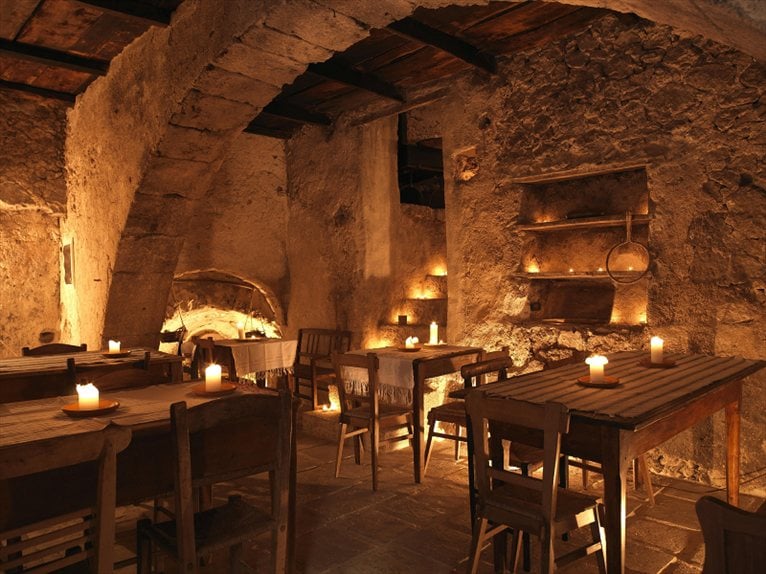 “A possible recovery, not an exceptional event”. This is the definition that architect Lelio Oriano Di Zio has given to his recovery tourist re-destination project (Albergo Diffuso S. Stefano di Sessanio) in the old medieval town of Santo Stefano di Sessanio in the province of l’Aquila.

Daniele Kihlgren, president of Sextantio Albergo Diffuso, has transformed the village into a village hotel whose reception is located in a cave located next to what was once a pigsty, maintaining the original identity of the spaces.

The project involves retaining the reciprocal integrity of territory and the original village, while protecting a landscape, that of the fortified medieval village characteristic of the Apennine area of Italy yet so fragile from the invasive town planning which from the post-war period to today has always been in dramatic contrast with the original historical heritage [...]. This unique approach to Restorative Preservation of the Minor Historical Heritage has restored to our Country places and villages which were definitively perishing under the weight of time and lack of care or building speculation where re-destination of use of these villages for tourism was underway. Today this approach of protecting the landscape and historical heritage, and the example of Santo Stefano di Sessanio is emblematic, have become essential projects for the economy of the whole territory, as well as having cultural value. In Italy which is in the middle of a global crisis and l'Aquila in Abruzzo being at the epicentre of a devastating earthquake in 2009, a new development model, curiously based on a cultural project absolutely independently has given logarithmic results under multiple variables, one of which being third party hotels which have increased from one to 15 since the beginning of the project, without constructing a single new square metre and ending that abandon of the mountain and inverting that downstream exodus looking for work which had been going on for almost two centuries”.

Dialogue with the identity was carried out on the one hand by means of an extremely conservative approach of reproposing historically existing element and where the new needs of living required elements and solutions which historically did not exist, we chose work which could in any case dialogue with this identity. The most recurrent and characterising choice of the project is the use of local recovered materials which is often used as it was historically and also in a completely different way for pragmatic purposes.

The recovery project has followed guidelines aimed at preserving the original sizes, the number and dimensions of the windows and doors, preserving the internal divisions and if possible the original use of the rooms in their domestic situation, and having overcome the structural requirements, the exclusive use of architectural recovery of the buildings or coming from the same geographical area.

As regards the interior and the furniture, original elements were also given priority also because this heritage has strong roots among the mountain people who cherish their pastoral culture and brings with it timeless furniture: beds, cupboards, chests, etc....

Where it was necessary to add elements historically not present, like bedside tables and wardrobes which were difficult to find in rural dwellings, “in place of the typical temptation of 'detaching' and using contemporary or designer elements, the original sin of so much architectural design, we had the elements made by craftsmen using recovered materials whose colour, patina, feel and smell made them blend in perfectly with the orignal elements”.