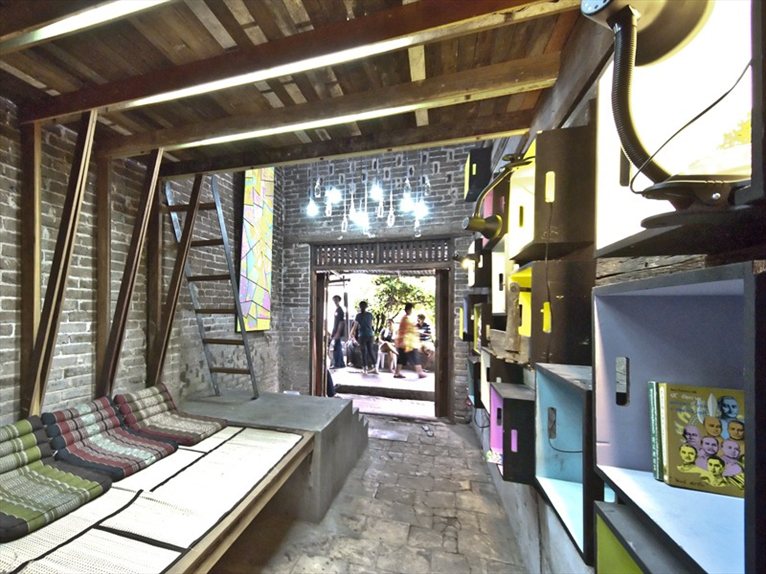 Sustainable architecture which uses recovered materials and which is the result of a collective work of self construction within the local community. This is the story behind the Old Market Library of Min Buri, in Bangkok. Completed in 2009 in just three months, the project was created by Norwegian firm TYIN tegnestue Architects.

TYIN Tegnestue is a no-profit organisation created on the initiative of the Science and Technology department of the Norwegian University. Financed by over 60 Norwegian companies, as well as by several private grants, the TYIN organisation attempts to help people in difficulty both from an environmental and from a social viewpoint through sustainable architecture.

The Old Market Library is the second project in Thailand for the Norwegian Group after their “Soe Ker Tie House - Butterfly Huts” built to accommodate Thai orphans.

The new library of Min Buri is located inside an old building, once used as a market, which was burned down at the end of the 1990's . TYIN's project envisaged its transformation and the consequent recovery of an area which after the fire had become a slum area.

An important aspect of the building process concerned the use of materials, all local ones and a great deal salvaged, which allowed a very low cost project to be achieved: old drawers became shelves and cladding for the walls created with old used wooden beams, recovered from the surrounding area.

The choice of involving the local population in the true building process was, however, anything but secondary. By doing so, not only did they reconstruct a building, but they also rebuilt a collective identity which had been severely jeopardised in the past.

In order to solve the problem of the floods which often affect the area, the floor was raised. Thus making the library available all year round.

The height of the volume permitted the creation of a mezzanine which separates a more peaceful zone for relaxing and reading from a more dynamic passing area in which visitors go around the shelves looking for books.

In order to not affect the previously existing volume, a self-bearing wooden structure has been created inside the walls of the old building. This made it possible to avoid consolidation work which would have meant much higher costs. The mezzanine has made it possible to extend the usable area.

The result is a new sustainable as well as original space, which is above all welcoming for both adults and children.