For a period of more than ten years, London has been regenerating some of its derelict urban areas, particularly in the East End. It is in this area that the new Olympic Park will stand, over a surface of about 2 km2 in Stratford, at the north of the Docklands, and it will host the Olympic Games starting in July 2012.

Part of the legacy project for the area includes the realization of a new neighbourhood, named Strand East Tower, whereWood Beton has built a 40 m high timber tower. Strand East Tower is a symbol of the regeneration of the area of Stratford around Sugar House Lane, a long neglected area now beginning its transformation.The new Strand Eastneighbourhood is located south of the Olympic Park. The area is currently a near derelict industrial area, partially demolished, where once several gin distilleries and print works had their premises, before being abandoned after the second world war.

The proposed regeneration includes the realization of 1200 homes; the latter will be characterized by a large number of family homes, energy efficient buildings, high quality design at affordable prices. In addition the development will include 58,000 m2 of offices, workshops, restaurants and a 350 bed hotel. The construction will start in 2014 and it will last around 10 years. 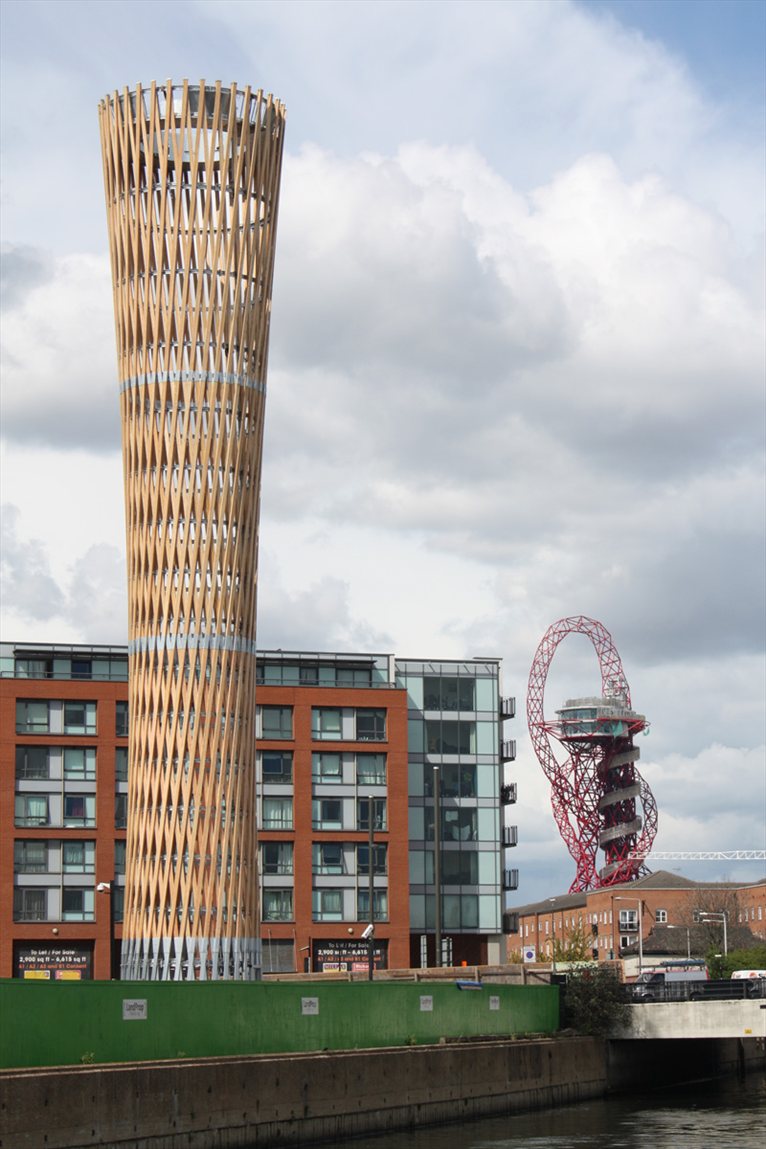 THE ANALYSIS AND THE PROJECT REQUIREMENTS
Elegance, transparency, lightness and at the same time a great stability: these are the characteristics of the unique timber tower built in Strand East and that will become a reference point of east London's skyline, a symbol of the reconversion of a derelict area into a new sustainable neighbourhood.

The sculpture was designed by architects ARC-ML and engineers eHRW while the construction project was designed by engineer Giovanni Spatti of Wood Beton spa. The sculpture has a slender shape, made of a grid of crossed timber laths and 16 horizontal rings made of galvanised steel. The tower is narrower at its centre so to create a hyperboloid shape that generates a self-supporting structure, without any further internal support, so that the resulting sculpture is transparent.

The sculpture is visible from many points around Stratford and during the day it will have its natural colour, whilst during the night it will be lit by over 600 LED lights, fully - controllable both in terms of intensity and colour and that can be programmed in order to obtain a variety of light effects.

When the client of the project, LandProp Holding, commissioned Wood Beton to undertake this delicate job, it specified the technical and performance requirements, such as:
- to built a monument of aesthetic impact, that had to be elegant and transparent
- to built a sculpture that could be possible to light up to maximize its visual impact at night
- to use prefabricated construction systems, to meet cost and budget constraints for both the materials and the realization
- to reduce maintenance costs, that had to be zero for the first 5 years
- the possibility of disassembling and reconstructing the tower elsewhere, or re-cycling the structural components

The design phase required a particular attention and it was necessary to use a tri-dimensional CAD software to realize the individual parts of the tower, the drawings were then used directly to work on the different pieces.

STRAND EAST TOWER
The tower has the shape of a 40 m high hyperboloid, hollow in the inside, with a 16 cm thick lattice, divided in four segments for the purposes of construction: the first segment is about 3,5 m high and it is made of steel, while the remaining 3 segments necessary to reach the maximum height of the tower are made of laminated larch timber.

The construction technique of the lattice is characterized by two layers of crossed laths: the first is clockwise and the second is anticlockwise, while they have a total torsion of 80° over the entire height of the tower, with an increase of 5° in correspondence of each steel ring along the entire length of the tower. The steel rings represent a hinge constraint in order to stabilize the laths along their height and they also are a template in order to apply the twist to the laths themselves.

At the top of the tower there is a steel platform, with a ring shape; a service lift supported by a steel mast, fixed to tower in two points in correspondence of the steel rings of the first three segments, allows access to the top platform.
The tower, made of larch timber laths, returns to the subject of sustainability that the client itself, LandPropHolding, wants to adopt for the wider regeneration of Strand East. The work combines a great stability, to both the lateral and vertical forces, with a light architectural shape that defines the uniqueness of the structure.

THE PROJECT CHARACTERISTICS
The joints: the structure is made of timber elements (larch laths), joined together to create a grid texture. The joint on the ground is made using steel structural elements. The first technical issue to be solved was therefore related to the joints between the timber elements, between the timber elements and the steel elements and the joint on the ground. The joints had to be structurally efficient and easily done on site, moreover they had to guarantee a good durability (one of the main requirements of the project).

Larch laths: the timber elements are wrapped around the hyperboloid, but each single element is twisted. It was necessary to understand how to realize this torsion. There were two ways: it could be done either during the production phase or during the assembly on site. The second hypothesis was chosen, i.e. to twist the laths directly on site, prior to verify the compatibility of this method with the forces that had to be applied. The laths were twisted and made congruent, using a steel template.

Temporary structure: in order to assembly the tower a central 16 meter high temporary structure was used; it had two tasks:
- it was a working platform for the workers during the assembly, as it had safety parapets so that all the operations could be carried out without the risk of falling from height;
- it was a template with a variable configuration in order to put in place the segments of the tower: the tower was in fact divided in three segments, assembled one after the other. The 16 meter temporary structure was fixed at its foundation and it was used to place the timber elements of each single segments, starting from the top one till the lower one.

Once the first segment was completed, it was removed and placed next to the temporary structure in order to allow the realization of the second and third segment; in the last phase the three segments were finally mounted one on top of the other (see assembly scheme). The use of a 16 meter temporary structure enabled all of the assembly operation to be carried out without working at an excessive height; the structure was then removed before carrying out the second connection.

CONCLUSIONS
Another challenge won by Wood Beton: to bring to the fore of London 2012 Olympic Games its engineering skills in the field of the great structures made of structural timber. So, after the important structures built in Italy and Russia, Wood Beton was chosen to realize this important work that gives a strong signal of change and marks the start of the Strand East regeneration, and provides a good omen for the 2012 Olympic Games.