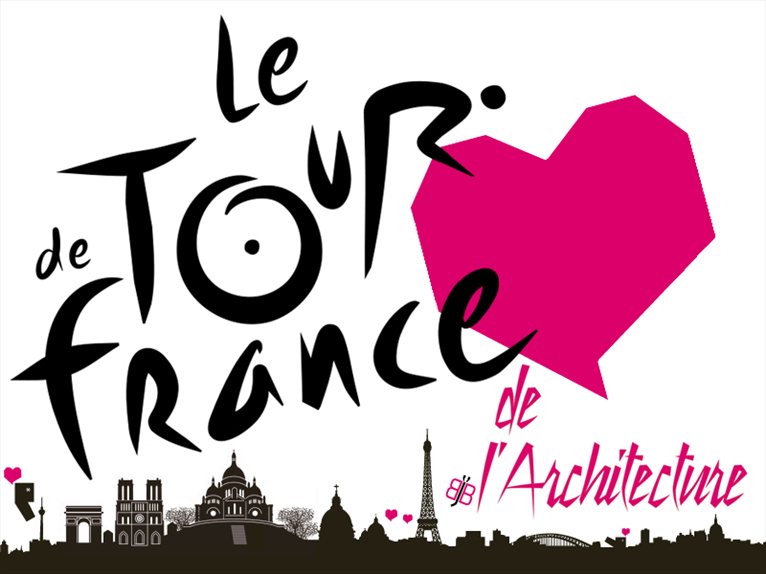 This year Archilovers has provided the opportunity of following the Tour de France kermesse, using the race as a pretext to analyse the shape of French architecture and to broaden our vision of what happens outside Paris.

Awaiting the victory parade along the Champs Elysées, we'll spare you the long list of works (which you can find detailed in each stage), but instead we present a selection of projects that have excelled in this survey of the “Hexagon” which has taken us from the beaches on the English Channel (La Manche!) those of the Côte d'Azur, passing through the border regions with Germany and the climbs in the Pyrenees.

The prologue in Belgium kicked off with Graux & Baeyens architecten, famed for their grafts in existing public and private architecture. LENS°ASS architecten The Rabbit hole, recent winner of the Wienerberger Brick Award 2012, showed us a rather fresh and original use of the most classic building material in these areas: clay bricks.

In the Nord, Pas-de-Calais, Picardy, Upper Normandy regions, we discovered a branch of architecture with particular characteristics. In this middle ground, also architecturally, between Paris and Flanders (and thus the Netherlands) we particularly appreciated Bigoni-Montemard's Convention Center Rouen, and ANMA Agence Nicolas Michelin & Associés' ZAC du Grand Large - Neptune in Dunkirk. Both works use rarefied light and the light thin and the tamed landscape of canals and waterways typical of these parts.

The central regions, not far from the border with Germany, Champagne, Lorraine, Alsace, Franche-Comté, have given us other gifts and other forms of contamination. LAN Architecture's EDF Archives Centre and SCP Malcotti Roussey's Musée du sel de Salins-les-Bains are excellent examples of the importance of contextualizing projects to better appreciate their features.

The second trip over the border to Switzerland gave us the opportunity to feature the widespread distribution of the high level of technical design achieved by the Swiss. The unusual design of Personeni Raffaele Schärer Architectes Mayen à Eison can be used to arouse the curiosity about the work of the many interesting Swiss architecture offices.

In the Alpine region Rhône-Alpes, there are fine examples of mountain chalets but not only: The Rossignol Headquarters provides an example of how even the mountain regions have been able to overcome certain clichés of the past, blending tradition and modernness. Renzo Piano's work in Ronchamp, with the Rehabilitation of the Ronchamp site annexed to Le Corbusier's famous church provides an ideal acknowledgement between contemporaneity and the experimentation of the last century.

Reaching the Mediterranean regions of Provence and Languedoc, there are excellent projects which, especially in this period, give us a great desire to visit the beaches and the beautiful countryside of the South of France. An apartment which makes an excellent starting point for a visit and and excuse to plunge yourself into French taste is Maurice Padovani's Le Prado, in the same neighbourhood of Marseille.

Yesterday, the peloton had to negotiate their final day in the mountains on the legendary roads of the Midi-Pyrénées and in Aquitaine. These climbs have shaped the history of the Tour de France and the landscape leaves you breathless, for the harshness of the Pyrenees and the windswept beaches of the Atlantic Ocean. Two projects which provide a perfect representation of these opposites are Puig Pujol Architectures'  Extension of a barn in Pyrenees, and Steven Holl Architects' Cité de l'Océan et du Surf in Biarritz.

So another tour de France winds down to the final parade in Paris (You can read about it in Mauro's blog on Monday) but this one has given us the opportunity to understand and contextualize projects and architects who are still not very well-known outside their own country. The extraordinary opportunities offered by the web, in this case Archilovers, of reaching Architectural firms and of selecting from the projects that the firms themselves decide to publish, has allowed us to by-pass the press offices of the Archistars and (hopefully) reach a new level of living and real architecture.