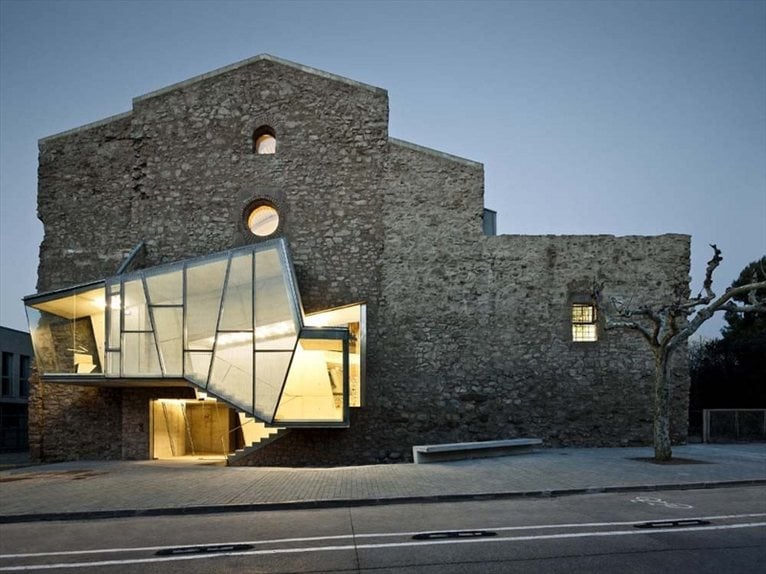 David Closes i Núñez's work on the Convent of Sant Francesc in Santpedor near Barcelona in Spain, completed last year, involved the conversion of the church into an auditorium and cultural centre which will be followed by a further project for a historical archive.

The whole convent, built in the eighteenth century by the Franciscan monks, was demolished in 2000 with only the church and part of the perimeter walls being spared, although in poor condition. In 2003 the recovery of the church was planned. This building, which is an integral part of the monastery complex, had never been isolated before then.

The church, whose building quality was very modest from the outset, was completely ruined by serious structural damage. The design intent was to preserve the historical profile on the south side, highlighting the qualities and characteristics of the interior spaces as well as the significant amount of natural light coming from the decaying portions of the roof.

The project was based on not changing the size and the spatial quality of the nave of the church and retaining the entry of natural light. The intervention consisted of different solutions like for instance a large skylight on the north side of the apse that gives a view of the bell tower from inside the nave or a slit on the roof which guarantees the entry of oblique natural light above the access wall.

The building's renovation was developed by applying the criterion of distinguishing clearly the new construction elements (using contemporary building systems and languages) with original and historical elements of the church. “The work did not hide traces of wounds or scars because it wished to preserve all aspects of the building's past. The collapsed areas and the traces of the missing elements remain visible”.

Another challenge was to maintain unity and the size of the main nave, in spite of having to build volumes for new uses and new requirements that the church had never housed: stairs to reach upper floors, toilets and utility rooms. To preserve the reading of the large and unitary space inside the church, these volumes have mainly been located outside the building. The series of staircases and ramps built, not only guarantee access to upper floors of the church, but also define a sort of museum itinerary that goes through the whole building.

The work and the construction methods have sought to consolidate the structure of the church without eliminating the degradation and damage which the building has undergone in time. David Closes' project has preserved the historical heritage of the building while adding new values which highlight and make the old convent church of Sant Francesc contemporary.