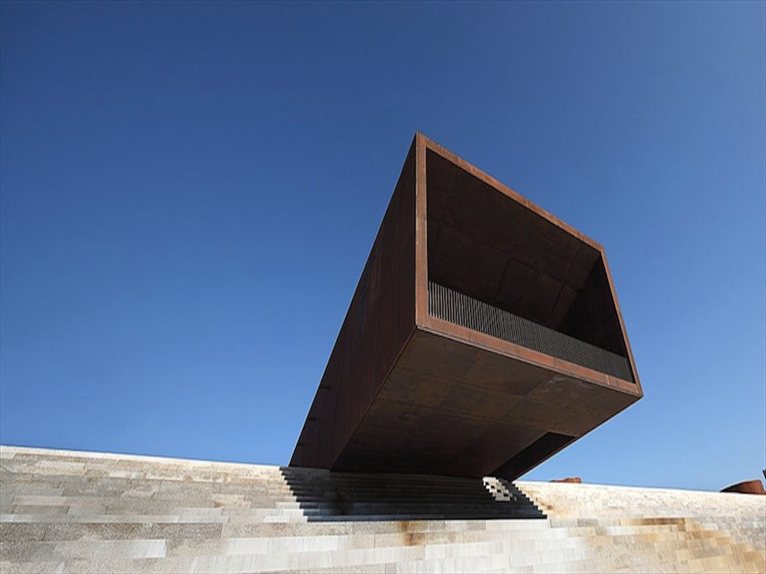 The city of Lamego, in Portugal is dominated by the park of mount Santo Estêvão, directly connected to the city centre by means of the imposing Staircase of the Santuario de Nossa Senhora dos Remedios. Here at the foot of the park, there is Barbosa & Guimarães Arquitectos's Lamego Multi-Purpose Center. Their project has mellowed the skyline of the mount by exploiting the natural slope of the land to cancel the volume and by positioning a plaza and an amphitheatre on the roof.

The original fair space has become an “antechamber” for the new pavilion, which has redesigned its limits, transforming it into a more controlled space with new relations with the surrounding roads.

On the southern façade, where there are the main access ways to the building, the great amphitheatre creates a connection between the two plazas, the new higher one and the other lower one. The new pavilion means that urban park gains a new orientation.

The three new spaces, the Park, the Fair and the Plaza, merging with the urban axis defined by the Alameda and by the Escadório de Nossa Senhora dos Remedios, reinforce the public space of the city of Lamego in a significant manner.

The pavilion, the "anchoring" structure of the intervention is a cor-ten steel rectangular structure overhanging the top of the staircase, almost as if it were simulating a telescope over the city. The structure permits various uses, resulting from the multipurpose nature and the dimensions of the arena and of the foyer. The building also offers showers and changing rooms, a multipurpose room and an auditorium for 120 people as well as a car park with four underground levels.

The granite present in the subsoil and in the architecture of Lamego, is used to cover these new public spaces, reinforcing the continuity and integration that the project pursues as its objectives.