On reclaimed salt pan and polluted tide flats at Bohai Bay, China (just over a two hour drive from Beijing), a new city for 350,000 inhabitants is being built from scratch. Founded as a collaboration of the governments of Singapore and China, this new Eco-City aims to demonstrate state of the art sustainable aspects. One third of the city is already constructed, and substantial completion is projected for 2020. The Ecology and Planning Museums are the first two buildings of the cultural district of Eco-City Tianjin. The Planning Museum is a “subtractive” space, while the Ecology Museum is an “additive” complement, a reversal of the space carved out from the Planning Museum. Like the Chinese “Bau Gua” or “Yin Yang,” these forms are in reverse relations. Both museums will be 20,000 m2 with a service zone connecting them below grade, bringing the total construction to 60,000 m2. A high speed tram running between these two museums connects to the central business district of Eco-City. The Ecology Museum experience begins with an orientation projection space next to a restaurant and retail opening to the ground level. From there, visitors take the elevator to the highest exhibition floor. Visitors proceed through the three ecologies in a descending procession of ramps: Earth to Cosmos, Earth to Man, Earth to Earth. Exhibits for Earth to Cosmos speak to the vast complexities of intergalactic ecology, from the beginnings of the universe and its governing forces, to the formation of planet Earth and its place in the galaxy. Visitors learn that ecology is a subject much larger and deeply rooted than is currently inscribed in the modern discourse. Descending to lower levels in the museum, the visitors arrive at Earth to Human. Exhibits take a turn to explore ancient and current schools of thoughts regarding Spirit and Matter, while revisiting Earth's creation myths from various cultures. Exhibits also narrate Man's origins and imprint on earth over the ages, concluding with the "Manmade Ecology" exhibit where current schools of ecology are shown. At the last section of the 3-Ecologies exhibits, the Earth to Earth section covers the extensive history of planet Earth from its formation in the Hedean Eon through Pangea, formation of the continents and the Ice Ages. The understanding of the origins of our eco systems provides a background to learn about our modern times and the ecological challenges we face as changes in earth atmosphere, global warming, melting of the polar cap and sea level raising. At the ground floor, the Earth to Earth Exhibition turns clockwise, moving down towards the Ocean Ecology Exhibition located under the reflecting pond of the plaza. Exhibits on the ocean's various eco systems are naturally lit with shimmering light from the skylights at the bottom of the pond. Four outdoor green roof terraces open out from Level 2 (Earth to Earth) with living exhibits changing with the seasons. The Planning Museum, entered directly from the shared public plaza defined by the two buildings, opens to an introduction area and a temporary exhibition area. A large Urban Model Exhibition (all of the Eco-City) is followed by a theory and practice zone. Digital projections will facilitate the potential to update and increase information. Transportation and industry exhibits follow on Level 2 with escalators loading to an interactive section and 3D Cinema on Level 3. On Level 3, there is a restaurant with views out to the sea. Escalators lead to Level 5 with Green Architecture, landscape and water resources exhibitions. This skylit large open top level has access to the green roofscape. The nearby Bohai Sea site has an ancient history as part of the Great Ridges of Chenier, which developed over thousands of years. The huge mounds of shells, a magnificent testimony to the power of nature, inspire the sliced edges of the mounds defining the public space around the new Ecology and Planning Museums. A slice through the mounds, like a slice through time, exposes these shell specimens embedded in concrete. People can also walk to the tops of the mounds for great views of the cultural buildings with the Eco-Forum and government center across the river in the distant view.
38 users love this project 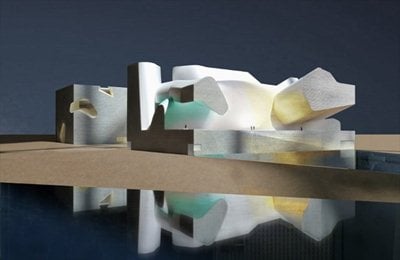 On reclaimed salt pan and polluted tide flats at Bohai Bay, China (just over a two hour drive from Beijing), a new city for 350,000 inhabitants is being built from scratch. Founded as a collaboration of the governments of Singapore and China, this new Eco-City aims to demonstrate state of the art sustainable aspects. One third of the city is already constructed, and substantial completion is projected for 2020. The Ecology and Planning Museums are the first two buildings of the cultural...