Architecture: Francesco Lipari, Vanessa Todaro (OFL Architecture) and Federico Giacomarra
Consultants: Mitchell Joachim (Terreform One), Nicola Corona (Agronomo), Alberto Serra (Informatic Tecnologies), Vincenzo Core (Musician), Domenico Canzoniero (ndb marketing), Marco Pesoli (Sound Engineer), Felice Allievi (Structural Engineer)
Client: Maker Faire Rome
Area: 140 mq
City: Roma
Year: 2013
Video: http://youtu.be/uHAUTja4F2M information: www.sthorto.tumblr.com - www.oflstudio.com - www.federicogiacomarra.com for the first time at the Maker Faire Rome, St Horto is the first prototype of an interactive garden that creates an ideal synergy between architecture, nature, music and social technologies.
Architecture has a key role: the asymmetric but well-proportioned spaces , which are uneven but harmonious at the same time, create unusual tactile, olfactory and visual perspectives designed to provide a deep sensorial experience that could be suitable for children too. When you go into the St Horto, you are immersed in a dynamic space characterized by a sequence of solid and empty triangulations that provides mainly educational functions. St Horto represents to Maker Faire Rome an explosion of technology, carpentry and advanced design techniques.
Cultivation areas, sonic harps, dining seating and an interactive lighting system alternate within 31 triangular tanks .
Furthermore, an accurate study on 93 nodes allows the project to have different triangulations that increase, in this way, its own technical complexity and originality.

St Horto is the winner of the international competition Hortocontest.
International press has so far widely recognized it especially thanks to the exhibition Cut ‘n’ Paste, curated by Pedro Gadanho that exposes the project St Horto until December 13rd, 2013 at the MOMA Museum in New York.

SONIC PROJECT
The sound design of St Horto is part of the idea of organic unity too.
Thanks to a special computer, St Horto can create in real time a musical composition by Vincenzo Core , ( and audio signals) starting from a single tune that will be worked out automatically according to homothetic principles.
The music length is divided into multiples of two, leaving unchanged the length reports between musical notes. These new versions with several degrees of “miniature” are located between four items that work on different logs.
The more the tune will be “miniaturized”, the more will be subjected to additional manipulations that will increase its own complexity. Moreover, the length of musical notes determines the length of the different sections proportionally: short notes coincide with short moments characterized by small and dense melodic miniature, long notes coincide with rarefied and wide moments. When all the sections that coincide with the melody have been generated, it moves on to another melody: the “macro shape” coincides with the “micro shape”.
There is no sampled timbres but all sounds are generated in real time through subtractive synthesis and physical patterns synthesis. The music is then modulated on environmental variables captured by a weather station installed in the garden: the variations in wind speed creates clusters of sounds, the temperature influences the timbre of voices, the humidity changes the sound with echoes and reverberations.
Anyway the melody reveal itself just through the human interaction. Sonic harps, provided with sensors that can detect the touch, are installed in the garden. The same sensors are also attached on some vegetables.
If someone touch plant racks, harps or vegetables that will produce notes allowing to improvise music. By touching once any plant racks, harps or vegetables in a few seconds the garden goes in “resonance” and plays the melody without any manipulation.

INTERACTIVE PROJECT
Another main feature of St Horto is its integration with the “objects web” world. Taking the cue from other sensor gardens and thanks to the experience of Alberto Serra, founder of Jardimpu www.jardimpu.com, we decided to install a new technological system that allows the monitoring of the plants in real time and a “social“ irrigation management by connecting with Twitter and Paraimpu www.paraimpu.com Management of the garden can be made online using several preset message such as: #sthorto drop on (to activate irrigation) or #sthorto drop off (to deactivate it). Tools: Environmental sensors to measure soil moisture, temperature, air humidity, light. Solenoid valves and sprinklers, Arduino and other programmable electronic tools, Monitoring Webcams via Paraimpu.
NATURALISTIC AND EDUCATIONAL PROJECT
The St Horto project combines 4 strictly connected factors: functionality, aesthetics, production and teaching. Production must be the cornerstone when one want to design the layout, so that the useful surface for the cultivation changes according to its contexts configuration.
The cultivation and the design of spaces, which are parted among themselves, appear both from an ergonomic perspective (height and depth suitable for cultivation operations) and at an educational/popular level because they are drawn up for kids, who will be able to watch in a simple way the garden and its interactions playing in it.
34 users love this project 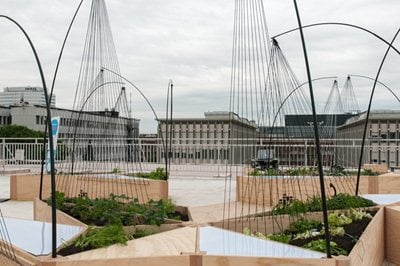