ENG - An old industrial warehouse of 1100 m2, at one of the most beautiful spots along the Amsterdam waterfronts, was transformed by CUBE architecten and SOLUZ architecten to an attractive café and the biggest fish restaurant of Europe. STORK RESTAURANT is one of the pioneers in project “DE OVERKANT” where an old industrial complex of several buildings is transformed to lively area for creative companies, restaurants, events, culture etc. It’s on the north side of the IJ, the big canal that splits Amsterdam in two parts. The north side used to be less known by the public but the last couple of years this area is suddenly discovered. This location has the potential to become a unique and high quality mixeduse area in the near future. Eigen Haard commissioned CUBE architecten and SOLUZ to redevelop the 30.000 m2 of industrial spaces for at least the next 15 years. They also made the architectural design for the STORK RESTAURANT. Interior Shock does the interior design and realization. The original facades only had windows high up, so the first intervention was creating large openings with glass folding doors that can open up large parts of the facade. The old small windows, witch were placed too high to actually see the other side of the river, were extended downwards. These two interventions brought a lot of light into the old factory, created an impressive view of the harbor, and provide an easy access to the waterside terrace in summertime. All facilities are placed behind one long continuous wall that doesn’t reach the facades or the roof of the building. The large open industrial space is thus left intact; the new elements are treaded as furniture-like additions. This wall contains several openings with one of them the open kitchen where all the cooking and preparation by the chefs is shown. For a lot of the styling re-used items were chosen by Interior Shock, like huge (unused) concrete sewerage segments, huge old cable reels of neighboring company Draka and wooden pallets. This way it was possible to create the feeling of a restaurant in the impressing big warehouse, with a minimal input of new material. The large central bar is placed between the cafe part and the more formal restaurant area. This way the huge open space is divided in different areas and atmospheres. 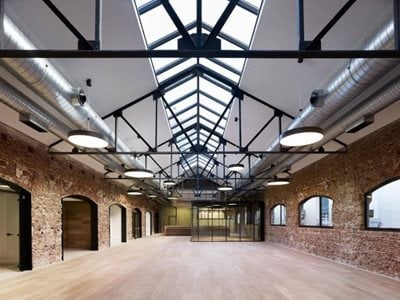 Why Warehouses are still relevant in the urban landscape