The new building is located on a tight inner site in Fitzrovia, central London, adjacent to two conservation areas and listed buildings. This required early and extensive consultation with local interest groups and a sensitive design approach to urban integration and building operations.

Visits by the client and design teams to neuroscience laboratories throughout Europe and the US, and detailed studies of UCL’s existing operations, allowed the development of innovative approaches to lab design. Interaction between theoretical and experimental scientists – from many countries and with a wide range of specialties and knowledge – are considered to be key to fostering collaborations which may create the next breakthrough in neuroscience. The design team collaborated with the client and scientists to refine and develop lab proposals which would provide opportunities for such interaction and maximum freedom for the science to flourish.

Internally the building has been organised in accordance with neuroscientific research indicating a human preference for designed spaces with high visibility and connectivity, with multiple vantage points, various visual volumes and permeability. This multi-scale approach reflects the ‘scale-free network’ of the brain. The three-storey theoretical computational labs are located in the middle, with direct connection to two storeys of double-height laboratory spaces on either side offering visual connection between floors of activity as well as the potential for large vertical spatial experiments. Each lab group operates over multiple floors, each with their own accommodation stair. Principal floor circulation routes are designed with sightlines through the entire building and interior spaces, and generous proportions to encourage interaction. Supporting the labs are social interaction spaces, flexible lecture and seminar facilities, and roof terraces. A brasserie opening to a wild flower garden provides a social focus for everyone in the building.

The labs and other areas of the building have been provided with a very high level of adaptability to meet the scientists’ needs. Double and single floor height spaces can be reconfigured, and a ‘plug and play’ design approach to the multitude of services needed permits maximum flexibility. The inside face of the cast glass envelope and internal glazed partitions can and are used as writing surfaces in addition to the glass whiteboards specifically provided in circulation areas and in offices/meeting rooms. The painted concrete soffits are a blue of 480nm spectral wavelength, chosen for its effect on mental alertness.

The translucent glass envelope of the building has a high thermal performance and the light transmission levels keep lighting costs to a minimum while providing an unparalleled quality of diffused ‘white’ natural light for the well-being and comfort of the building’s users.

Flush with the facade are openable triple-glazed windows, with mechanically operated and adjustable cast glass louvres to suit each occupier’s requirements for privacy, clear views or to reflect afternoon sunlight deeper into the building. From outside the cast glass skin glows softly at night, and its whiteness raises the quality of light within the street. This project represents world-firsts in structural cast glass and in the prefabrication of large multiple channel modules for site installation; the latter maintained the quality of the workmanship and permitted a site install faster than for any previous U-channel cast glass façade.

The efficient building design plus CHP provides a regulated energy carbon reduction of 35%, and the Aircuity system samples air for VOCs, solvents and other particles and gases, reducing lab air change rates from typically 10-12 ACH to 4 ACH, providing a further carbon reduction of up to 20%. The SWC is the first new-build installation using a demand-control system in the UK. The SWC has achieved an EPC rating of 28 and is rated BREEAM Excellent, which are impressive results for an inner city highly serviced research building with three separate environmentally controlled zones.

On Howland Street the building provides a 100m long public colonnade which more than doubles the width of the pedestrian realm. It is animated with an art installation of one thousand fluttering ‘pixels’ hanging from the colonnade soffit. One side contains portraits of the university’s Nobel Laureates in physiology or medicine, and on the other side is Johann Sebastian Bach’s entire Musical Offering (regarded as one of the most extraordinary expressions of musical creativity). Five curated vitrines punctuate the translucent wall in the colonnade with neuro-related artwork which engages the public.

A new ‘pocket’ park on the west side of the building provides an open public seating and gathering area with a landscaped wall. A projected neuroscience image is projected onto the building’s west wall. The south facade provides a backdrop to a ground level landscaped courtyard and is largely covered with suspended white ‘pixels’ that move in response to the wind currents.

“The design team worked directly with neuroscientists for over 4 years. We have been learning from each other, architects from scientists and scientists from architects, we have all become neural architects so to speak” 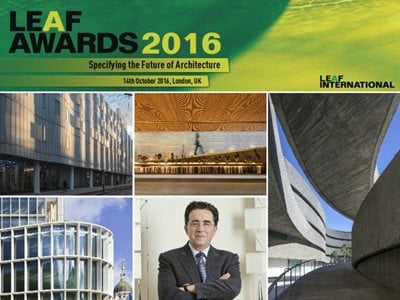 The building has a gross internal area of 13,805m2. The contract sum was £75m with a net construction cost of £55m, £3,980 /m2. The new building is located on a tight inner site in Fitzrovia, central London, adjacent to two conservation areas and listed buildings. This required early and extensive consultation with local interest groups and a sensitive design approach to urban integration and building operations. Visits by the client and design teams to neuroscience...