Swarovski is delighted to unveil Luminaire at the 14th International Architecture Exhibition of la Biennale di Venezia, a collaboration with its Director, Rem Koolhaas. Swarovski has worked with Koolhaas to create Luminaire – a dramatic illuminated archway surrounding the entrance to Monditalia, one of three exhibitions that make up the distinguished Dutch architect’s ambitious presentation of this year’s 14th International Architecture Exhibition of la Biennale di Venezia. The majestic structure, resembling a grand stage set, measures 6 metres in height by 20 metres in length and is made up of thousands of vibrantly coloured glass light bulbs and 15kg of Swarovski Crystal Rocks, all set on an elaborate wooden framework. Together the crystal and light highlight the traditional Venetian archways, evoking the elaborate Renaissance façades of Venice's palazzos. Luminaire also references the grand-scale urban lighting installations that are an integral part of Italian culture, often associated with celebrations and religious feasts, even forming a centrepiece in several of Federico Fellini's films. The Luminaire leads visitors into the world of Monditalia, Koolhaas’s storytelling of Italy’s history through its relationship to architecture, ancient and modern. “The topics of Monditalia are the current state of Italy, between treasure and crisis, knowledge and controversies, history and politics,” said Rem Koolhaas, “perfectly introduced by a special entrance gate which we developed with Swarovski.” At its heart there is a huge reproduction of an historic map, which runs through the Arsenale’s long halls to create a literal procession through the country. The displays are paired with a programme of theatre, music, film and dance, all drawn from the directors of la Biennale di Venezia’s festivals. Nadja Swarovski, Member of the Swarovski Executive Board, said: “It has been an honour to collaborate with Rem Koolhaas on such an uplifting and inspiring installation. Luminaire acts as a transformative portal to the world of Monditalia, Rem’s vivid tableau of Italian history, and offers a fresh perspective, literally bringing new light to bear on a familiar place.” Constructed in a traditional workshop in Puglia by a family-run business with generations of manufacturing experience, Luminaire is a gateway into a very different Biennale, one where the established order of contemporary architecture is investigated, upturned and chronicled, with art, science and entertainment coming together to decipher the legacy of a century of Modernism. This year’s International Architecture Exhibition, entitled Fundamentals, is a major re-staging, renewing the Biennale’s emphasis on the history of architecture and architectural culture. Fundamentals consists of three interlocking exhibitions: Elements of Architecture in the Central Pavilion; Absorbing Modernity 1914-2014 in the National Pavilions; and Monditalia, which fills the halls of the Arsenale. Together they illuminate the past, present and future of architecture.
19 users love this project 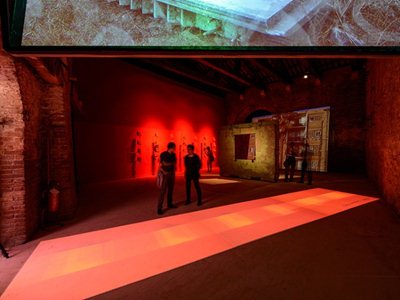 Winners of the Venice Biennale announced